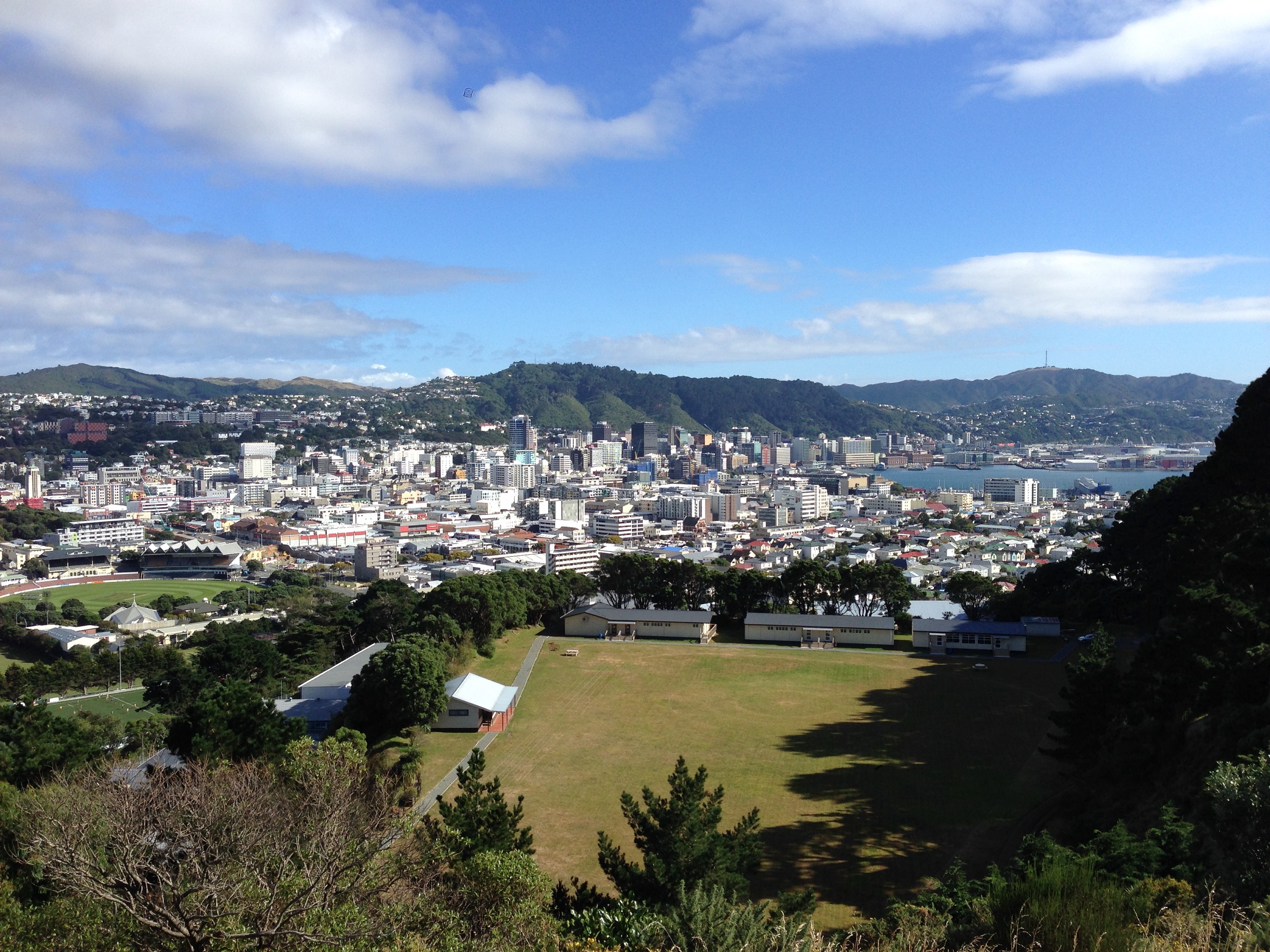 I’ve just returned to Wellington for a brief break from the bleak north. When I’ve been away for a while it’s always fun to wander around and see what’s changed, catch up on the news, and read all the fish posts I’ve missed (nice to see new contributors).

I think the best news (possibly the best Wellington has had in decades) was finding out that mouldy old moustache failed in its bid for the mayoralty and is no longer in the council. Other than that the elections don’t seem to have produced much worth discussion.

The Memorial Park underpass is going very well. For those who are into such things there’s an enclosed viewing platform on the southern side which peers right out over the edge of the trench.

They’ve been pouring something like 10 meters of slab per day, so by the time I went past this morning they were already about 50 meters further along than what these photos show. It’s a good perspective to see why changing the design midway through to fit an Option X-like scheme quickly became less and less tenable once construction had begun. Everything has been built around the geometry for a flyover.

The most amazing thing about this project to me is still the way in which it has been done for no reason other than a political directive to make Memorial Park nicer in time for the celebrations later this year. As much as I might dislike NZTA, the idea that politicians would exert such control over a process strikes me as seriously corrupt.

On that note it sounds like the flyover is full steam ahead. The crÃ¨che is being loaded onto sleds as we speak and will be slid into its new position a few meters back from its current spot, and right alongside the flyover. Yeah, that’s really going to look good. I struggle with this attitude to conservation that it’s okay to just move buildings around and nestle them in between flyovers and other ugly structures. It seems so transparently dishonest. This building will only be moved again (or demolished) in a decade when the now seemingly inevitable second flyover is built since it sits right in the path.

In sports news I’m told someone scored some big number of runs at the Basin and it was a good excuse for everyone to get excited and have some beers.

In apartment news some buildings have sprouted at the bottom of Taranaki Street. The Il Casino building on Tory is now complete. Sadly I had high hopes for that building but now that it’s finished it looks rather cheap and nothing like the fantastic render I seem to remember. (Memory being what it is maybe the render was shit too.)

Tansmission Gully Motorway is now being followed up with more link roads. There’s talk of a massively grown out of all proportion proposal for the Grenada to Petone link that seems to have become a mini-motorway over the years and more mini-motorways up Takapu Valley. Of course this will necessitate the need for the Cross Valley Link mini-motorway as well a few years later. Motorways for everyone. (How is this sprawling little city of of 450,000 people going to afford to maintain all these motorways?)

Avatar is coming back to Wellington for not one, not two, but three sequels. There was barely enough story in the first one to make a movie around so I don’t really know what Cameron is thinking. It won’t mean much for Wellington really. There’ll be a few stars flown in to prance around on a sound stage with ping pong balls stick to their foreheads. Then the VFX slaves will be shipped into town to work their required minimum 50 hour work weeks, and forced to mainline energy drinks to complete their shots as the inevitable crunch times hit. A bunch of people in Hollywood will make big money. Some contractors who get to stick sets together will go “ooh ahh” about how amazing film industry is for New Zealand’s economy, and John Key will proceed to drop the country’s pants and bend us all over for another raping the next time Hollywood jets into town.

Another one bit the bus last week on the Manners St gauntlet. In response the council is faffing about with speed restrictions in the CBD. It’s not going to achieve crap. Everyone knows it.

Public transport planning is still a disaster zone. The grand idea now for public transport is going to be some electric buses on a split routes to Kilbirnie and Newtown. So we’ll probably end up throwing this around for a decade, end up spending nearly the same as light rail, for about a quarter the effectiveness. What a stitch up that whole ridiculous process has been.

Finally, the council has come up with 8 (mostly) Lousy Ideas to grow the economy that they seem quite proud about.

1. A film museum. Ohjesusfuck really? To grow our economy people are still beating that utterly low value tourism horse? Yes, because what the city needs is another tiny, tacky tourist trap. I can really smell the dollars flowing into the city at the thought of it.

2. International air connections. As a frequent international traveler in the past few years I’d welcome this one. But it’s a long shot and FUCKING expensive for what you get out of it. This idea isn’t even new, it’s been on the cards promised for some time so I don’t know if it should count. But I’ll let it slide as it’s worth some consideration, particularly if central government were involved since such a thing is much greater than a Wellington city matter. It’s more of a lower North Island matter, and in that case maybe it should be located elsewhere (ahem Horowhenua with high speed rail links to downtown terminals?)

3. A tech precinct. (facepalm.png) Because people working in technology need a map to show them where they should congregate. And they’re dumb, so they won’t collaborate on things unless they’re put together. This ridiculous idea to build Silicon Valley clones (on some scale) has been done to death all over the world, and almost everywhere been a failure. I think I’ll call this Field of Dreams planning. What’s the idea: build it and they’ll come? Build what exactly? What services can you provide in some “precinct” that don’t or won’t exist across the whole city? The whole of Wellington city is so small that the whole city either is or isn’t an attractive place for technology companies. Stop the precinct planning nonsense. It’s not just dumb, it makes us sound like a stupid provincial wannabe town run by incompetent luddites. (Oh shit, we are that aren’t we.)

4. A conference and concert venue. Ohjesusfuck again. What is with New Zealand’s obsession over the past few years with conference venues? A decent concert venue in Wellington would be a nice to have. But what is this idea that by having an event that causes New Zealanders who live IN New Zealand to go out and spend their SAVINGS on booze and food is somehow good for the economy. It’s a fucked up form of accounting. Do we really need a conference center? Stop focusing on tourism and hospitality as some magic bullet for growing our economy, it won’t.

5. A Miramar framework. Ok but what’s big idea about it? To be honest it’s about time that Miramar got some love, but doing your job as a city council and doing some URBANFRICKENPLANNING does not qualify as some big idea for economic growth. It qualifies as business as usual. Or rather, about time you did your job, since it hasn’t really been business as usual around here. A big idea for Miramar would be connecting it to the rest of the city via a high frequency, high quality, frequent public transport spine. Instead what WCC means is that they’ll spend tens of millions repaving footpaths, maybe putting a few pavers in here and there between patches of asphalt, and planting an immature tree or two that will be torn out in a decade during the next suburban framework. Economy grown. Pfft.

6. Better transport. Blah-blah-blah wafty words about efficiency and stuff. Stop the vague hand wavy nonsense. This is core council business that it’s managed to mess up for the last two decades. If you’re going to have a big idea, actually have a big idea. Here’s what a big idea looks like: Light Rail along the growth spine to Miramar by 2020. 30 kilometers of bike lanes in 3 years. A screen line and charge to enter the CBD with your car. Notice how these are actually ideas!?

7. Open for business. Clearly they started to run out of ideas now. Aren’t we open for business today? WHAT ARE YOU DOING? You mean that as part of your daily work at the council you’re not working to improve process or make things easier on yourselves, residents, and businesses? You’re basically saying you should all be fired with this one.

8. Livable city. Again we have more wafty words, and no actual big idea. I’d say this is just continuing the status quo, but actually we haven’t really been doing a good job of this over the last decade, so it’s more getting back to where we should be. What’s the big idea to make the city more livable? Build some flyovers? Widen some streets? Dump more cars into the city? Waste money on bad public transport ideas?

Here’s eight actual ideas, produced in about as long as it takes you to read this (and in no order, cuz obviously LRT is first ;).

1. Develop a proper master plan for the Pipitea and rail yards area to guide its development over the next few decades.
2. 30 kilometers of bike lanes in the city striped down in the next 3 years.
3. Take full control of public transport back into local council or regional council hands.
4. Put in place a toll on cars entering the city to pay for public transport and pedestrian improvements to offset the impacts of the RONS on the city.
5. The council taking a hands on approach to key developments in the city, acquiring and agglomerate land, and where its necessary to improve connectivity, and to set some examples (or some such).
6. A public transport spine through Newtown and tunnel to Kilbirnie and on to Miramar. (Light rail of course.)
7. A proper long term plan for SH1 through the city that will see it buried and stops the ad-hoc, incremental, piecemeal approach that has been taken to date.
8. Hire a world class urban design team and empower them to do world class urban design here in Wellington.