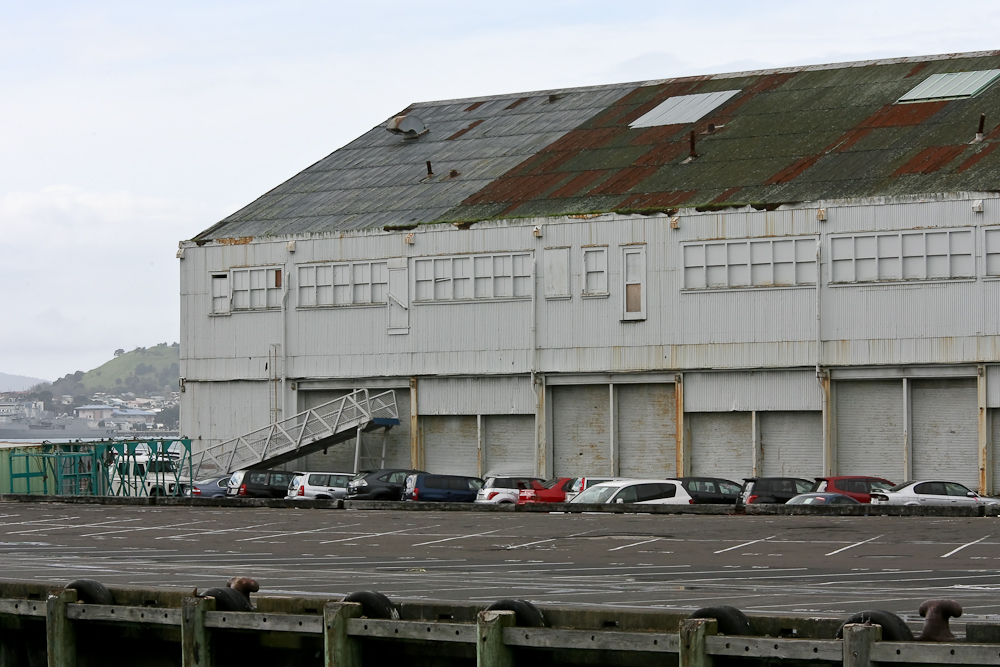 Poor old Auckland – even though I can’t stand the place, it is almost getting my vote of sympathy this week. First up, some good news: they’ve banned Vuvuzelas from Eden Park. Personally I think they should bring in a mandatory shoot-on-sight policy for anyone found wielding one, but that might be a little harsh for a $2 piece of plastic.

But secondly, time for some Brickbats. I heard on the radio this morning someone blaming “Wellington” for the latest stuff-up on the beleagured Queens Wharf debacle / shed wrangle / utter series of unmitigated cock-ups.

What, blame the whole city of Wellington? Surely not. I think they mean just one man, Murray McCully. And he’s an Aucklander, through and through. Voted in by Aucklanders, remember. “We” down here in Wellington take no responsibility for that man – you can have him back any time you want!

On a more serious note though, just what IS happening with Auckland and its sheds? A recap: you may remember that a couple of years ago, Labour Minister of Sport (who was it – Trevor Mallard?) suggested that Auckland have a waterfront stadium, but they had to make their minds up in one month, and all the red tape of Resource Consent would have to be ignored. That one was rejected, but then the next suggestion – this time by National (and Minister of the Rugby World Cup, Muzza McCully) was an edifice for “Party Central” to be built on Auckland’s Queens Wharf, which was duly purchased for about $80million, mostly off the people who already owned it.

Queue scene therefore for a terribly run competition being won by a consortium of NZIA presidents or ex-presidents or some such unholy cabal and resulting almighty clusterfuck (all Aucklanders, needless to say). Followed swiftly by massive kerfuffle scuffle of unseemly bitch-slapping amongst architects and public bodies, when the resulting best picks were snafued by an even more unholy cabal of McCully, John Banks, and Mike Lee (Aucklanders also, the lot of them).

(
photos courtesy of SkyscraperCity – thanks!)

Straight after the statement that “there were no winners, and none of the schemes would be selected”, one of the schemes was duly selected, and worked up some more – which ended up looking almost exactly the same, and costing half as much – or was that twice as much? It hardly matters, because then it got chucked out to be followed by a new scheme – by who, or whom, or by whose go-ahead, it hardly matters, because it was widely agreed to look like an ugly, ungainly, wiggly worm, and demolished the old sheds that were there all along. But at least someone had made a decision. An Aucklander, no doubt.

Today however, it has all flared up again – a “group of Auckland architects” has objected to the proposed demolition of the 2 old sheds. Esteemed architect and NZ TV-folk-hero David Mitchell said:

“architects had a professional understanding of the planning and construction issues involved in preserving buildings, an appreciation of architectural quality and a love of Auckland as it was… ….There are noble structures beneath the battered tin sheathing of these sheds, and we now strongly urge Aucklanders to resist the current proposal to bowl them over and replace them with a new building. … The Queens Wharf sheds are among the few good examples of early industrial architecture left in Auckland”

Which may well be true – they are old (ish), they are / were industrial, and there is no reason to bowl them over and replace them with a worse building, for a party that lasts only 3 weeks. We’ve been saying that for ages – at last someone up there has some sense at last. They may, or may not be worth keeping long term, but they’re not worth bowling just for the (itself, much maligned) concept of “Party Central”.

However, sensible comments like that were not really helped by fellow Architect and pig-fancier Tony Watkins, writing on the Auckland Architect Association website, who said blokes, sheds and rugby were the right ingredients for a party on Queens Wharf. Which may well be right, but then he said:

“The sheds … have spent a lifetime getting ready for a party. No architect can create that magic.”

Gee, thanks a lot Tony, shoot your whole profession in the back why don’t you. Actually, any architect worth their salt in Wellington could easily create magic either with or without an existing shed – not sure about you lot up in Auckland. But now the whole scene is being laid into by a lecturer at AUT, one Paul Moon, who has come out fighting with knives aimed straight for the jugular of the dithery lot in AKL. And the AAA are fighting back. Moon first:

“…architects were artists first, and building designers second. The magnificent constructions conceived by the likes of Bernini and Michelangelo were marvels of creativity and originality, and achieved lasting appeal. Yet, both of these men, and scores of others like them before the 19th century, came to architecture after starting their careers in the fine arts. This is no longer the case. Increasingly, it seems that architecture has become dominated by the art of fashion-infused mimicry…. [and of the sheds, he said:] ….Their aesthetic value, even if they were restored to pristine condition, would be negligible, except for those with very fanciful imaginations. The sheds were constructed during a period when the Arts and Crafts movement was reaching its maturity, yet they show no influence of this. Neither are there any traces of modernism in the sheds, which was the emerging force in design at that time. Indeed, there is not even the residue of Gothic-Revival, which a few of the more conservative architects still indulged in at the beginning of the 20th century. So some architects have started to throw around words such as “heritage”, “rejuvenation” and “history” as an alternative justification for keeping these dour and decaying storage spaces.

The fact is that the sheds on the Wharf were designed purely for functional reasons, in an age where aesthetic appeal in industrial buildings was considered even less important than it is now. To elevate them to anything even resembling architectural merit is disingenuous. Realising this, the argument has again shifted – even more unconvincingly – to emphasising the fact that among the materials used in sheds’ construction is kauri and Australian hardwood (which could surely be recycled for better uses), and that there is some alleged intrinsically historical value in these morose buildings continuing to slouch on our waterfront.

Admittedly, historical value is subjective, but it is surely a fallacy that just because something is (relatively) old, it therefore deserves a protective case placed over it so that it can be preserved in perpetuity. And all the time that the space is being held hostage by these grim buildings, the opportunity for our present generation of architects to shine by designing something genuinely inspirational on Queen’s Wharf is kept out of reach. That, surely, is the bigger architectural offence.”

This extremely valid diatribe has been followed swiftly by Carl Douglas on the AAA website where he says:

“The idea that architecture springs in purity and force from some magical resource of creativity or inspiration, and must struggle to overcome the sniping of petty technicians is very Ayn-Randian, and completely out-of-touch with the way that design proceeds. Materials, stakeholders, constraints, context and – yes – history, are not wet blankets suffocating the creative life out of architecture. On the contrary, they are the raw materials out of which good design is formed. Moon might be nostalgic for a Howard Roark to sweep in and deposit his creativity all over the wharf, but this isn’t my idea of a good time. Architecture is not simply the production of great artworks. The lives and stories of which the sheds are a trace are common and everyday, but that doesn’t mean they should be erased from memory as unimportant. Again, as an historian, one might expect Moon to be more sensitive to minor histories….

…But demolition is permanent. We shouldn’t knock the sheds down unless there are concrete plans for something demonstrably better. At the moment, there exists no master-plan for the CBD waterfront, no clarity about whether the wharf is to be a cruise-ship terminal or not and no realistic timetable for new construction to be completed in time for the Rugby World Cup, and no consistency in the process of procuring a design. Demolition should not be a default stance. Inventive, memorable, and imaginative architecture doesn’t have to begin with a clean slate.”

Hear Hear ! Carl Douglas for Mayor of the Super-Village !

“The Auckland Regional Council has voted unanimously to keep one of the historic Queens Wharf sheds alongside the Government’s temporary structure that has been dubbed “the slug”. The ARC this afternoon endorsed the redevelopment of Shed 10 as a permanent cruise ship terminal on Queens Wharf, alongside the Government’s temporary plastic shelter for a fan zone during the 2011 Rugby World Cup. The Council had previously backed plans to demolish both historic cargo sheds, but has since consulted with the Historic Places Trust and decided to keep one of the sheds on site. It is proposing to demolish the second shed and move it to another site.”