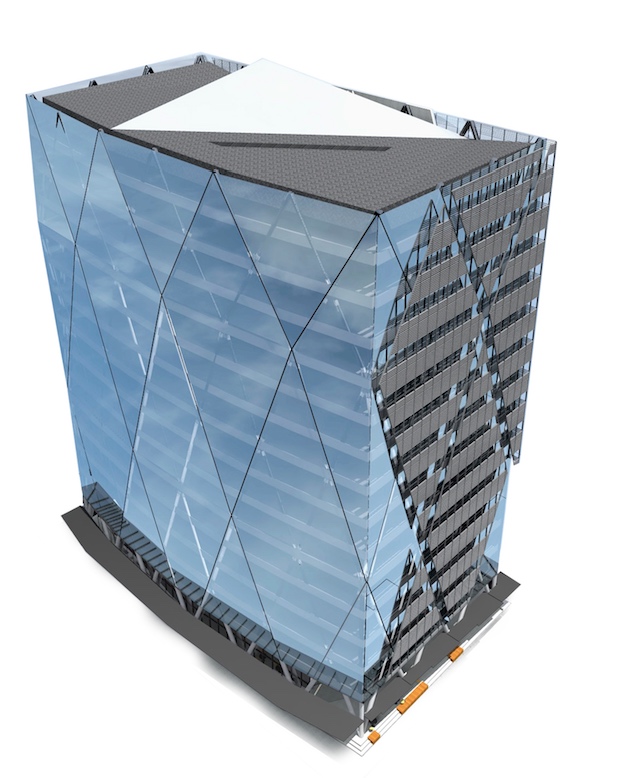 One of the architects at Studio Pacific Architecture has helpfully sent in some images of the building to be built at 20 Customhouse Quay – many thanks Marc. He notes:

“Good to have caught your watchful eye on the 17th June with your post regarding the redevelopment of the BP House site on Customhouse Quay. Appreciate your comments.

We thought we would send you some fish food with an image of the north facade of the proposed building to answer your query regarding solar exposure and control. The north and west facades of the building will have horizontal louvres that are composed as large diamond shaped panels in order to relate to the folded diamonds in the glass on the waterfront elevation and the dia-grid structure. The louvres will provide effective solar control for the northern and western sun. There are no louvres on the east, waterfront elevation so as not to obstruct the fantastic view of the harbour and because the solar impact is not as great.”

Here at Eye of the Fish, we really like it when architects want to contribute to the discussion about Architecture and matters urban, so thanks for the pic – and the explanation. Here is the detail he was talking about:

It’s interesting to compare the need for solar control on this tower compared with the Hearst Tower in New York (refer to our last post) – here’s that picture again:

There, the tower (much taller) is also a diagrid, and is fully exposed on all 4 sides, but doesn’t have any external shading. Yes, it is sort of shaded by the other buildings nearby, and yes, the sun is pretty strong in New Zealand, but I am amazed that towers are being built with little or no external shading – effectively they are relying on three things:
â€¢ solar control glass
â€¢Â internal blinds
â€¢ massive air con systems
The Hearst tower still succeeded in getting an exceptionally high LEED rating, so it should be energy efficient – but this building at Customhouse Quay should be even more so. Here’s hoping!