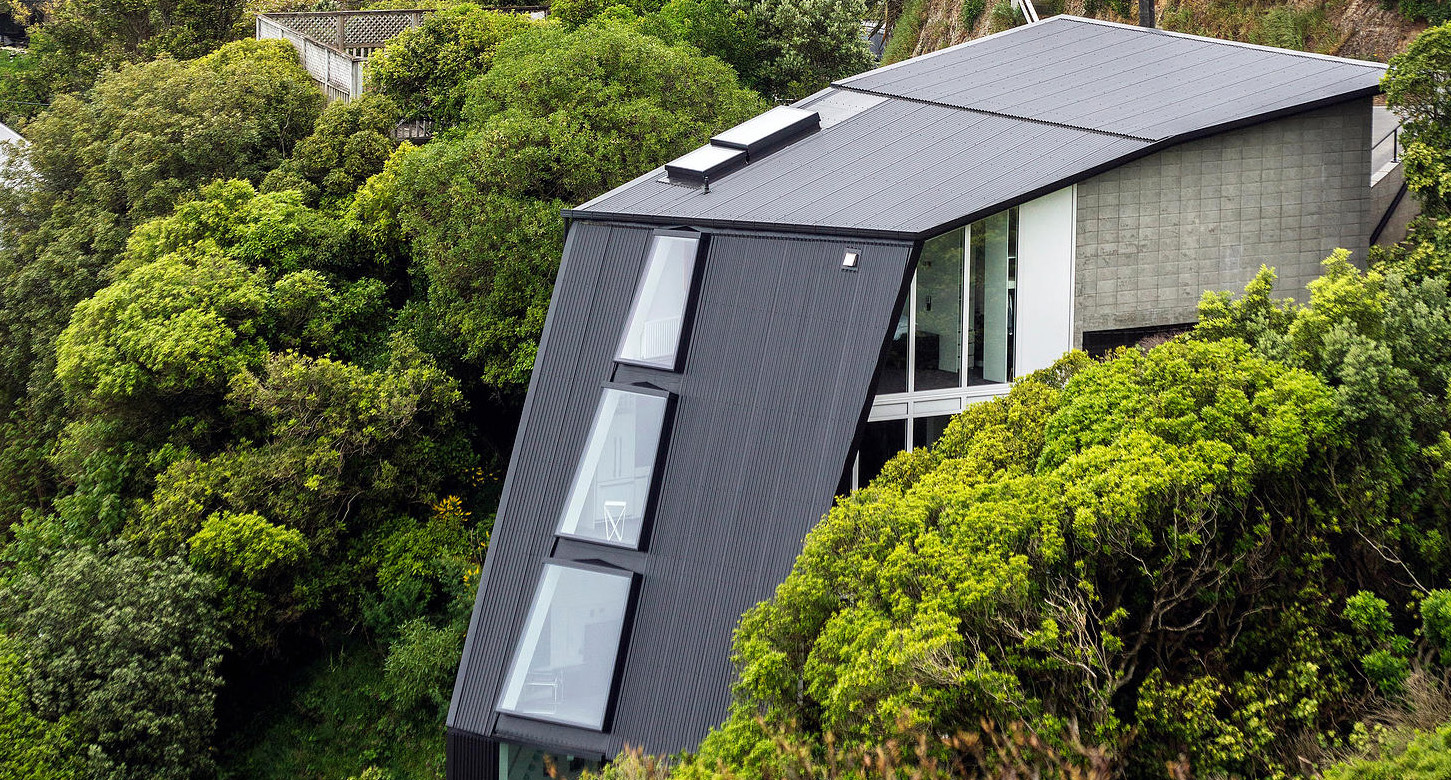 I’m loving the new kiwi version of Grand Designs. The host, Chris Moller, seems to be settling well into his job – and last night’s show was an absolute blinder. Architect Nic Ballara’s house (BBC Architects), clinging to the side of a cliff in Wellington, was a fascinating build to watch, and the finished creation was a joy to behold. Even the Stuff website has some nice words to say – perhaps the joy of watching the All Blacks win has effused the entire country in happiness, as quite amazingly, even some of the normally rabid mongrels of Stuff commenters have begrudgingly said it was good. Heaven’s! whatever next!

You’ve got to admire the bravura of a house like that. The BBC Architects website calls it the 45 degree house – and indeed, a slope that steep is nothing to be sneezed at. I’m surprised that the site was selling for $300k though – surely at that price, the previous owners would have got tired of waiting for offers and accepted much less? Its the sort of site where any sane, rational person would say “No, too hard” but that doesn’t seem to have deterred Nic – indeed, it has spurred him on. Actually the whole of BBC Architects seem to be a pretty adventurous bunch – partner Amanda Bullman is also the type of architect who never takes no for an answer, and they have been steadily turning out some good buildings over the past decade or so. But without doubt, this one takes the cake hands down. I didn’t catch who the structural engineer was (does anyone know?) – the Geotech engineer featured (but I’ve forgotten his name, sorry), and he deserves to take a bow as well, as it is on his rock anchor design that the whole house is fixed. But to float the ground floor of the house completely off the ground, suspended just by steel strops, is fairly audacious. Well done to all – the architects, the engineers, and most of all – the Contractors! Incredible feat.

The inside looks gorgeous as well. BBC Architects seem to have a fairly typical “architects” range of colour schemes, namely white, black, and grey (or should i say Resene Black-White, ColourSteel Ironsand, and Firth bare stack-bonded concrete block grey?), but there is evidence of bold contrasting colours like Yellow – the rest of the colour pallet of course being provided by the local bush, the far off sea, and the sky. Who needs more than that?

But what I was most interested in was the numbers. Now, given that Nic said on the telly that it cost $730k all up (including GST or not?) and that it was working out about $3300/m2, that puts it at about 221m2 all up. That’s about average for a kiwi house nowadays, in the suburbs. While the total cost is a lot, the cost per m2 is incredibly good value considering the extensive engineering put into this project. Most impressive indeed. I hope that BBC get a lot more work, including equally daring clients, after this. Well done Mr Ballara!