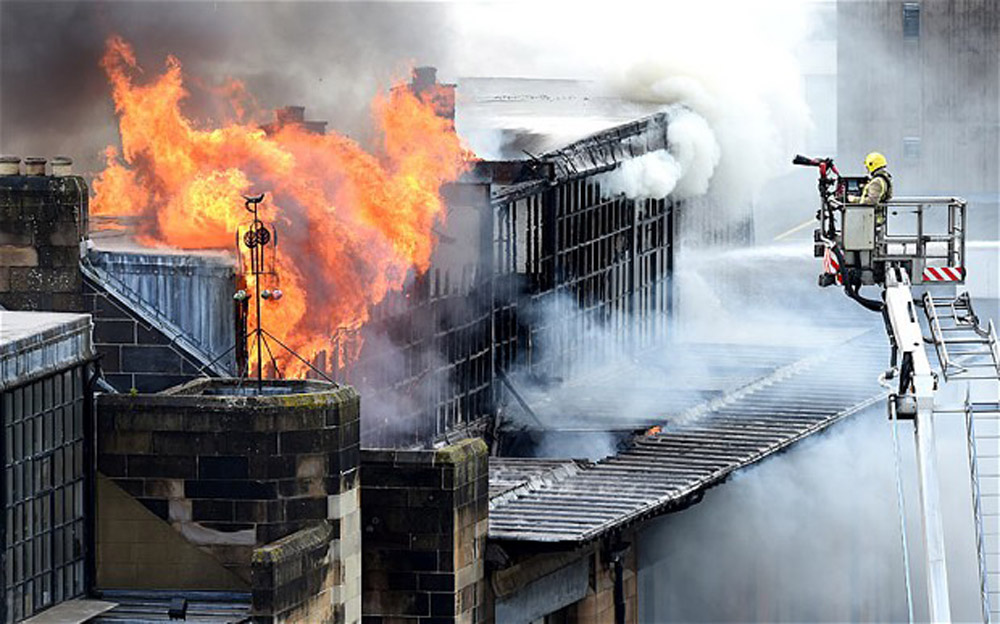 The local media hasn’t caught up with this just yet, but we have just seen the greatest loss of architecture since – well, I don’t know. Charles Rennie Mackintosh’s masterpiece of design, the Glasgow School of Art, caught fire yesterday, in preparation of the 4th year final degree show. Sparks on foam, in the basement, and as flames were filmed breaking out of the roof, for a number of hours, then i think that we have to presume that the building has effectively lost all it’s wonderful wooden interiors – hundreds of aged Scottish oak furniture fittings, a wonderful wooden library, and of course all the work of all the students preparing for year end reviews.

It’s a sad, sad day. It’s also amazing that the school appears not to have a sprinkler system installed – how can you have a internationally acclaimed timber-lined monument filled with working students and essentially neglect to retrofit a sprinkler system? Heads will roll, no doubt, but too late is – well, just too late. The stonework may survive, but the oaky timber-work will all have gone skyward in plumes of smoke.

I’ll try and post some pics up here later, but they will be all over the foreign media already – but I’ve got to confess that I am a little confused. I actually was very soon going to write a post on the despoliation of the building by architect Stephen Holl, who has built a giant rectangular overbearing shape above the building, and when I heard about the fire, I immediately thought of the new building work causing the destruction of the old – but when I checked the pictures, there’s was no addition there! Where’s it gone?

Clearly I need to do some more research, as Holl’s butt-ugly awful addition has clearly been built on top of some other Mackintosh building, not this one – but in a way, this is a double tragedy for the Scots – two of their best Macs ruined, one by fire, the other by architecture. More on this story as it comes to hand – or, pipe up and chip in if you know the answer!

Post-script: OK – I was sort of right and sort of wrong. Holl has built a new wing – a massive extension, directly across the road, which was to look out at / over the original Mac building, and now may just be going to look out at a ruin.

Instead, I guess, they now just have to be thankful that they have already built the Holl building (described as the Serona Reid wing?) and will therefore have somewhere to house the students next year. Exactly what they do about marking of all the student work they have just lost, who knows! A+ for everyone I guess! And next year’s bunch of students will learn all about demolition and rebuilding of a masterpiece…

Post-post-script: There still seems to be a lot of confusion as to whether the Library has been destroyed, or if it has been saved. Conflicting reports. I’ve included a plan and a couple more pics, in my efforts to find out what has happened. There is flames and smoke pouring out these windows (below) and at first I thought they were the Library windows (and hence nothing would have survived that inferno) but now I’m wondering if they were the corridor windows, and just aren’t showing up on the plans. Anyone know?