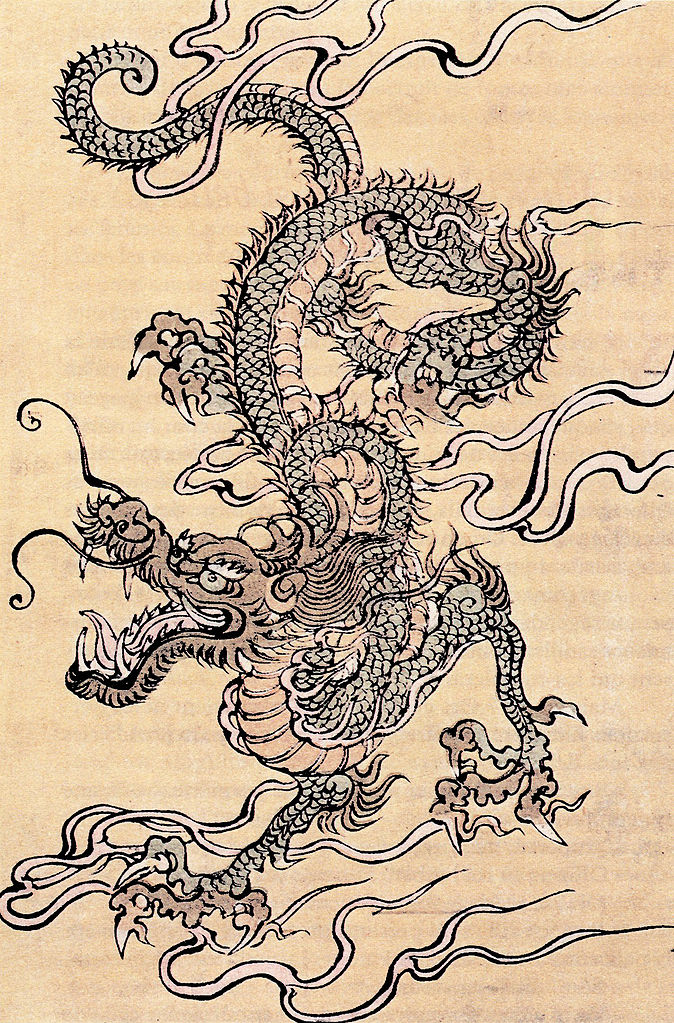 Year of the Dragon

Hello: Indeed, as minimus notes, we’re back. Thanks for your continued interest, support, and friendly comments.
Sensible post from mini, somewhat off the wall one from maxi:

“Occupying the 5th position in the Chinese Zodiac, the Dragon is the mightiest of the signs. Dragons symbolize such character traits as dominance and ambition. Dragons prefer to live by their own rules and if left on their own, are usually successful. Theyâ€™re driven, unafraid of challenges, and willing to take risks. Theyâ€™re passionate in all they do and they do things in grand fashion. Unfortunately, this passion and enthusiasm can leave Dragons feeling exhausted and interestingly, unfulfilled.
While Dragons frequently help others, rarely will they ask for help. Others are attracted to Dragons, especially their colorful personalities, but deep down, Dragons prefer to be alone. Perhaps that is because theyâ€™re most successful when working alone. Their preference to be alone can come across as arrogance or conceitedness, but these qualities arenâ€™t applicable. Dragons have tempers that can flare fast!”

Sounds just like Maximus! Maybe I’m a Water-dragon, not a Fish. Apparently, dragons are good at research… yep, read this – according to the Chinese Zodiac website:

“Water calms the Dragonâ€™s fire. Water Dragons are able to see things from other points of view. They donâ€™t have the need to always be right. Their decisions, if well-researched, are usually better since they allow otherâ€™s to become involved.”

Maybe the legendary Taniwha under Wellington harbour is a water-dragon. And if you’re wondering what relevance it has to an urban blog on Wellington architecture, then note this career advisory:
“Dragons prefer leading to being led. Jobs that allow them to express their creativity are good choices. Some good careers include: inventor, manager, computer analyst, lawyer, engineer, architect, broker, and sales person.”
Well well well. Who would have known? (Apart from around a billion Chinese perhaps). You’re a Dragon if you were born in 1952, 1964, 1976, 1988, 2000, or 2012; but only a water-dragon if you were born in 1952 or 2012. How many of you architects and engineers out there are dragons?

Actually, I’m really not sure how that works – there’s a steady stream of people wanting to become architects and engineers, but are we really seeing a boom in high quality architects all aged 24 (ie born in 1988), 36 (1976), or 48 (1964)? I think not. Perhaps they’ve all become sales people and inventors instead. Still, there is something about a dragon that really gets the old creative juices going in some people:

But let’s just briefly dissect this dragon, metaphorically of course. The picture up the top is of a Japanese dragon, but its a 19th century print courtesy of Wikipedia, but in the Chinese school of thought. Chinese and Japanese dragons seem to fly, but are sort of eel-like, flying across the sky – without wings. No reason a mythical creature should have wings really, but Westerners seem to take their winged creatures so much more seriously, and always depict a dragon with wings. Now, I have an opinion on that (as always), and its not pretty. Being as we live on this planet, the only one with proven forms of life, and everything is descended down the same tree, then look at a bird: 2 wings, 2 feet. Or look at a bat: 2 wings, 2 feet. Mammals: 2 front feet, 2 back feet. Lizards: 2 front feet, 2 back feet.
But insects: 6 feet. Not sure about the wings. Is a dragon really just a large insect? Like a cockroach! They’re both pretty indestructible, and covered in hard scaly skin…

My point is, traditional Smaugian emphasis on dragons having 2 wings, 4 feet, seems to be prevalent in Lord of the Rings type imagery, and all the young fan-boy Dungeons and Dragons mythical tales that go with it. There always seems to be 4 legs to scurry around on land, and a pair of mighty wings with which to flap heavily through the sky. Yet the old Chinese dragon seems to be able to fly quite happily, in the manner of a side-winder snake across the desert, pushing his body off the ether that surrounds us all.

So, why 4 feet? Surely a dragon should be like a bat, with just 2 rear feet, and 2 wings? Unless it is really just a giant form of cockroach? Hmmm….

Anyway: modern depiction of dragons (website Draconika says that dragons are not earth-dragons, fire-dragons, water-dragons etc, but instead are mundanely just divided into colours, such as green, red, blue, white and black…) are so much more scary than the altogether much more tame versions of dragons as depicted in medieval times. You can see this here in Sanzio Raffaello’s painting of St Michael, where the dragon looks more like a large dog being brutally and slightly comically strangled:

Or here in Carpaggio’s painting, where the dragon looks more like an Australian frilled lizard (a small, jumping, non-flying lizard, with a scary attitude, but no fire-breathing), and, most relevantly, we see some gorgeous medieval architecture behind:

I wonder if this city has any basis in fact?

Then there is the wonderful Albrecht Durer’s etching of St George slaying his dragon, uncomfortably piercing it through the head, impressing the womenfolk, according to legend. The dragon looks little like what we might see today. More like a Komodo dragon than a fantasy from our modern era, it not even particularly reptilian:

And what a legend it was. Apparently the site of the slaying was in what is now (well, this week anyway) modern Libya, and St George first captured the dragon and brought it meekly into the city, only slaying it when he had the opportunity to baptize some 15,000 men (not women or children). St George, obviously not an Englishman in those days (he’s also patron saint of countries such as Romania, Bulgaria, Aragon, Catalonia, England, Ethiopia, Georgia, Greece, India, Iraq, Lithuania, Palestine, Portugal, Serbia, Ukraine and Russia, as well as the cities of Genoa, Amersfoort, Beirut, Fakiha, Bteghrine, CÃ¡ceres, Ferrara, Freiburg, Kumanovo, Ljubljana, Pomorie, Preston, Qormi, Rio de Janeiro, Lod, Lviv, Barcelona, Moscow, Tamworth and the Maltese island of Gozo).

Phew! St George is a busy lad… Here he is again, a little more butchly, this time by Rubens:

The poor old dragon is once again pierced through the lip. Ouch. Damned uncomfortable being a dragon, but on the other hand, no more awkward than your average Cuba St teenager. It’s all getting just a little bit more gory, but still mild compared to the rather than the more over the top creations spawned today: here is a wonderfully over-the-top portrait by fantasy artist Ertac Altinoz, apparently of a crafty dragon called Rainbow :

Of course, this year is going to be rife with dragons, what with Harry Potter coming out on DVD, the Girl with the Dragon Tattoo just screening, and the Hobbit film coming up:

There’s the whole seeming fascination with fantasy creatures no doubt being put into hyper-drive by the astrological thing above, and the afore-mentioned Smaug at last making an appearance in Jacksonville. No doubt at some stage we will be able to see the mighty dragon’s lair, in the vast polystyrene castle being erected in Miramar (but will he have 2 legs or 4? – I can’t tell from the poster above). Most importantly, will the Mighty Mighty host the launch party for the Mighty Smaug?

More seriously-urban-oriented commentary no doubt coming soon from the Fish. We have managed to resurrect minimus for some more of that dragonish fire-breathing commentary (thanks!), and we may even have some more commentators signing on soon (fingers crossed). Even I may write something a bit more relevant some time! In the mean time, be prepared to see dragons everywhere. Dragons on books, dragons tattoed on backs, dragons parading down the street. Chinese New Year celebrations are coming up soon: get your dragon tattoo ready now….

In Praise of…. a red light district