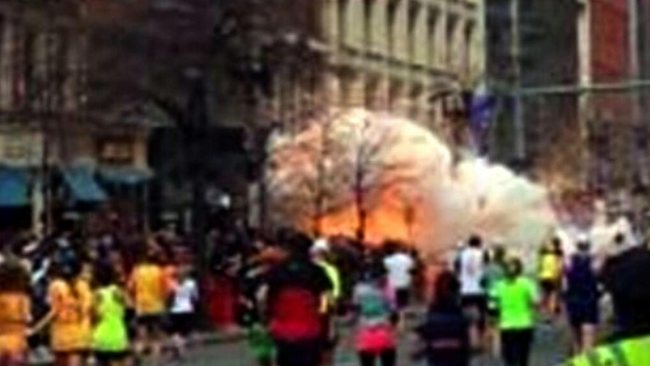 But still, it happened, and as an act of urban terror, a bombing has a chilling effect. The two (maybe even three) bombs exploded today in Boston, Massachusetts, will have a permanent effect on the American people. Sadly, three people have died – then again, thankfully, only three people have died. Dozens more have been badly wounded, and probably many will have lost limbs, or even eyes etc. The aftermath of bombs is never pretty. The scars will last forever. President Obama promised that the perpetrators will be brought to justice.

It’s been a dozen years since the horrors of the Twin Trade Towers. You won’t remember what you were doing on the morning of the Boston bombing, as the memory will fade away, but the Trade Tower terrorist attacks will never fade from anyone’s memory. I was at home in my flat on Mt Victoria when my flatmate burst into my room, telling me that the World Trade Tower had fallen down. Having been up there a few years before, I thought that highly unlikely, but scratched on some clothes and proceeded to turn on the radio. The airwaves were full. After a few minutes, I thought – I wonder if there is any TV footage? You know the rest – the world was watching. And apart from a small, idioticly misguided few who still believe it was the work of the US Government, and the even smaller few who now seem to believe that it was all faked, “just like the Moon landings,” the Trade Towers will haunt us for years yet to come.

Yet the same cant be said for the Boston bombings. A satchel full of nails and ball bearings does not sound like the work of Al Quaeda to me, but more the attempts of a domestic terrorist. Despite the reports of some people at the scene of today’s marathon slaughter, thee bombs were not big bombs – truth be told, they were tiddlers. They puffed white smoke and hardly blew over a thing. No buildings collapsed, just glass shattered to the street. Remember the Oklahoma City bombing? Now that was a truly massive bomb, with Timothy McVeigh found guilty and executed for his crime. Hundreds were killed – the bomb ripped the city administration building into shreds for many floors up. No foreigners were involved – just genuine All-American efforts there.

Wellington is of course lucky that we don’t suffer from such horribleness. We have, in the past, and the Trades Hall bombing in Vivian Street many years ago, killing Ernie Abbott, is still our worst domestic terrorist attack (the French terrorists, Dominique and Alain, were of course the cause of our more well known attack). The names are still fresh enough in my mind that I have not yet had to consult the wondrous invention of Larry and Serge. And while we are there, we should still remember Neil Roberts, lonely computer geek / punk person, who blew himself up on the doorstep of the Wanganui Computer Centre (which, if I remember right, was not actually in Wanganui, nor even in Whanganui, now I come to think about it). And I don’t think that anyone ever figured out quite what Roberts was self-imploding over. Maybe there is a book about it. But if there is, I haven’t read it yet.

Bombs were a regular feature of living in London in the 80s and 90s, courtesy of the IRA mostly – ironically, who were heavily funded by Boston-based “Irish support” groups. Indeed, the use of the bombing campaigns by the IRA sort of took the gloss off my time abroad – they blew up the local pub in Covent Garden, that I had been going to meet a friend in a few days later. The Sussex Arms. Two dead. Smashed to smithereens, closed for reconstruction for a year or more. They blew up part of Canary Wharf when I was there too, destroying a perfectly good but exceedingly ugly mirror-glass Post Modern mock-Tudor office block. Just one dead? Warnings had been received.

The Stock Exchange was bombed in London in 1990, providing much work for architects for the following decade, as well as for many Irish labourers. Massive amounts of damage. Another massive bomb in the city, the Bishopsgate bomb, took out half the buildings in the Square Mile, with millions of windows having to be replaced, three people dead, a repair bill of over 800 billion pounds, and one newly completed building (a fellow architect, Helen, had just completed the job a week or two before) being physically shunted sideways about three foot by the blast and thence having to be reconstructed right back to floor level, just like in Christchurch. They asked Helen if she would like to be the site architect again, and rebuild it exactly how it was. She declined, reasoning that life is too short to build the same building twice. She was right.

The Bishopsgate bomb, which almost closed down the City for good, ironically did create the opportunity for something good to come out of the whole twisted mess. Firstly, the Insurance companies took notice, and said to the British politicians to “sort this mess out with the Irish.” They rebuilt the city, in less time than it has taken for them not to act in Christchurch. And secondly, of course, with the destruction of the grade One listed heritage building of the Baltic Exchange, there was room for the Gherkin to grow. But that’s another story.

Right now, of course, the world’s eyes are in Boston. Which is a pity really, as just a few pages into today’s Dominion Post, was a story about a bomb in Afghanistan, where about a dozen people died. Page 5 or page 7 – low down in the pecking order. No video of the bombs going off. No world breaking news footage. By nightfall, I can’t even find it on the Stuff website. It’s a far bigger, more deadly bombing than in Boston. But it is not Boston.

Updated: with animation of explosion going off at Waco – approx equivalent to a 1-kilotonne nuclear bomb, apparently. All of the explosion part occurred in less than 1 second. Contrast that with the bomb in Boston, where people are still upright and running in the photo of the bomb going off. All I can say is: thank God that the two disaffected youths that made that bomb did not know about how to make a fertilizer bomb!