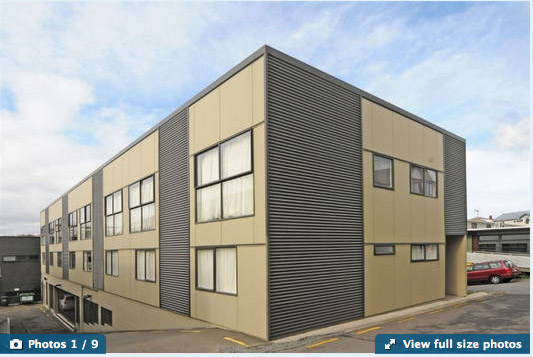 Do Estate agents live on the same planet as us? Have a look at this:

Immaculate Investment Tidy Price
This is an extremely well presented investment or home for the discerning purchaser, offering two double bedrooms and a location that will see you conveniently placed for all necessities. Close to transport, shopping and the city, practical and spacious living, and a motivated vendor with a deadline to meet. Call me now to view or see you at the open home. CV $290,000.

At a price just under $300k, this ends up being one of the cheapest places in Wellington (Newtown). There’s nothing wrong with that – in fact, we need cheap, affordable housing.

But it is that last line that fair makes my blood boil. “Style: Executive”

Don’t have me on! This is no more an Executive style, or a house for an executive, and indeed has absolutely no style at all – this is perhaps the most appalling piece of crap shoebox design that I have ever seen in Wellington, possibly even in the entire world. Even a chimpanzee with a crayon in each hand could come up with a better solution than that. The outside is just awful. The inside is soulless to the extreme.

By Executive do they mean stripped down to the basics? Is that minimalistic design actually carefully sensitive juxtaposition of two contrasting cladding systems as a sensitive critique on the past two decades of architectural commentary, or is it just the cheapest and crappiest box that the developer thought they could get away with?

Is the lack of eaves a daring commentary on the cult of the E2 Risk Matrix and the rise of the leaky building syndrome, or have they just built it up to the boundary and sawn it off with a blunt instrument?

Is that kitchen a masterpiece of efficient planning, or just the cheapest set of beige cupboards slung into a corner? Is the view out the window, straight onto the side of the neighbour’s building really the view of an Executive? Could that bathroom planning be any more devinely apportioned and proportioned?

I think not. Sharpen your act up Estate Agents.