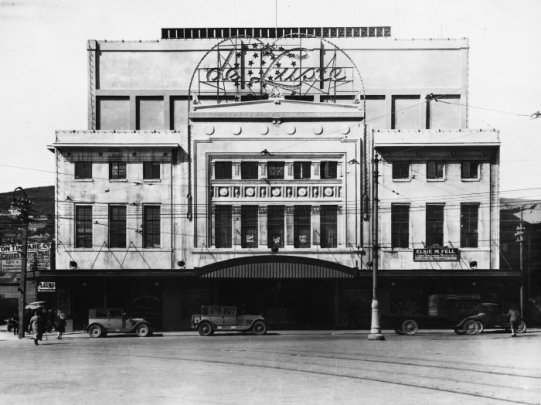 A snippet in the paper a while back regarding the possibility of a “boutique cinema” in Wigan St has had the Fish thinking what a great idea this would be.

For a city that used to be renown for high quality movie experiences (in the 1950s almost the whole town would turn out to the movies on a Friday night, in a wide range of small cinemas), recent Wellingtonians have had a disappointingly sub-standard cinematic experience – starting with the old Mid-City complex, thankfully long gone and turned into DoC House; the abysmally designed Rialto cinema, now thankfully demolished in that rebuilding down on the waterfront; the recently departed Regent cinema of Manners St, now underway in a transformation into a Cooking School (isn’t that boring cooking fad over already?); the current Courtenay Central which comes so close to being OK but sadly falls so short of providing anything more than a perfunctory experience, and the continued non-arrival of their promised Arthouse add-on; sadly, the stabby seats of the Film Archive which still scratch my ankles; even the Paramount cinema which still has an annoyingly low and small main screen, suffocated by that proscenium arch and an unfinished refurbishment.

My obvious favourite therefore is still the big old Embassy theatre, which does truly give you a magical movie experience, although year-round shows mainly just the big block-busters and still has an unfilled hole beneath, where a second screen is destined, one day, to fulfill it’s dream of being a multiplex – and new favourite too at the Roxy in Miramar.

So – what are we being proposed? Thankfully, it is for the small arthouse brigade, with the Lighthouse cinema chain looking at providing three ground floor cinemas seating for 40, 50 and 60 patrons, tucked away somewhere in Wigan St. Where exactly in Wigan St we are not yet to know – but this street, Used to be all like this once full of history, and now home to only the two remaining, much altered buildings that we have come to know and love as Havana Bar, has lots of room. Yes, there are also a few brick warehouses, including one that regularly hosts band practices for the Navy / Air Force, but basically the entire street is now turned over to the last remaining area of panel beating in the inner city, with auto striping, rust removal and basic body bashing being a staple item. There is body-bashing of a different kind going on at a new arrival in the street, with a ‘gentleman’s club’ or gay brothel opening up behind a black glass facade, right next to a storage depot for rubbish trucks.

Of course, it would be great to have some good design of the cinema building as well – both inside and outside, such as in Dorothy Brown’s perhaps, but seeing as it is in the esteemed neighbourhood of some of ArcHaus’s finest efforts, I’m not holding my breath. There is not much parking in this area either – what public carparks are there are fiercely guarded by the local panel beaters, although it sounds like there could be a bit of swapping of property going on here: I suspect that when the Cinema arrives, Chung Hing panel-beaters will depart.

Eclectic is definitely the word for the residents of the street, and of course it is going to be changed yet again with the recent arrival of the first inhabitants in the Tattoo apartments, and the later arrival of the inmates of the Te Aro Towers (now laughingly called The Peak), but of course the biggest inhabitants in terms of size and influence in the area has to be the School of Design – hidden behind the School of Architecture on Vivian St. Up on the top of the Design school is rumoured to be an elite squad of crack media design students, just waiting to unleash their filmic talents onto the eagerly waiting world. What better place for an arthouse cinema to be situated?