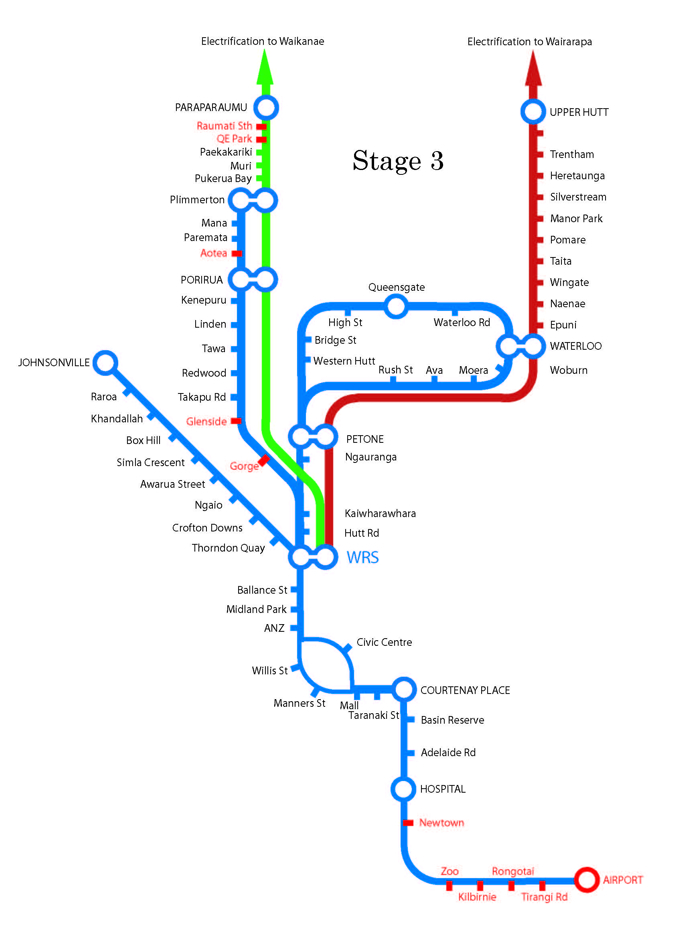 Following the previous post on Spine Studies, and the closure of the inevitable “consultation” period (where they waste our time by asking for our opinion, and once they have it, they will just ignore it), I realised that the big issue with the Spine Study is that it has missed the really big picture: its not the method of transport, but it is ALL about the actual route of the Public Transport Spine.

There was this one, pictured above, which was around at the last election. Published by the Greens I think? Along with a ginger group for better transport?
By comparison, the more recent design from Generation Zero is here for comparison, in two scales – zoomed in, and zoomed out.

We can compare this to the routes planned by the Superlink group promoting Light Rail / Modern Trams in the late 1990s, where their route looked like this:

Of course, what we really need to link this to, is the official current route plans, and to the future options. At present, MetLink shows this:
Umm, nothing. They’re crap! Amazing – there is NO single network Metlink Map online – truth be told, it is so complex, that it is too complex to actually download as a PDF – so we will be doing the world a favour by posting a few versions here, of selected slices. Here we go:

and finally, zoomed right in, there is this:

Of course, what we are trying to do is to compare the route against the official options in the Spine Study:

Here it is in a bit of a simpler format, produced by volunteers again, to show the “frequent bus” network, and it is a lot more easy to visualize with this simple graphic:

We can also see it here in a map of the “core network” routes:

Where is all this leading? I’m not at all sure, except that I think it is evident that there is huge confusion over the route, especially if it cannot be reproduced on your own council website in one piece, and it is a far cry from the relative simplicity of the famed London Underground tube map, which has changed a zillion times since the 1930s, and yet still stays essentially exactly the same. You know the one:

(Except, of course, someone has this year decided to remake the most well-known, iconic map of the century, and gone rather circular instead):

I’m actually more impressed with the efforts of Generation Zero in Auckland, where they have somehow calmly planned out the next 40 odd years of Public Transport routing, free, for the benefit of the city. You’ve probably seen them before – but if not, then have a look at this Congestion Free Network sequence: it’s a masterpiece!

Seems to say to me that we have a wee bit more planning to go through before we get to the right answer.