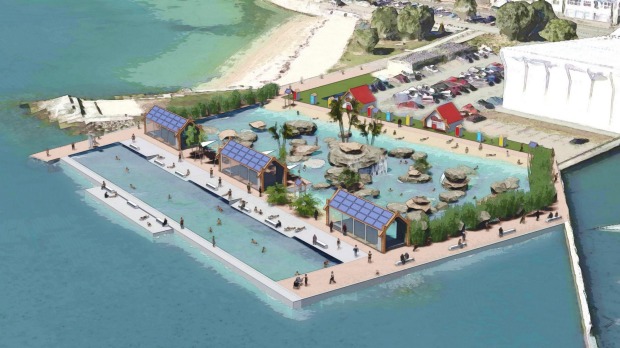 “Better Te Aro Collective”. Like others, I’ve been surprised to see the sudden emergence of this Better Te Aro group, who have garnered two newspaper headlines in the last week. Who are they? Where do they come from? Why do they claim to speak for Te Aro? Do they own Te Aro? Do you have to own a coffee shop to belong? There is no website for them, yet, so how do we contact them? How do we join?

Actually, I really like the ideas they have come up with so far. The first one was sort of predictable – Jeff Kennedy, co-owner of Prefab, ex Cafe L’Affare, wants to largely pedestrianise Jessie St, where his cafe is. Well, technically, make it into a shared space, with nicer paving, planters or trees, slower speeds, less cars – what’s not to like? Jessie really only serves as a rat run for people who can’t be arsed going another 50m to Vivian St and turning left there – it could be completely blocked off and not inconvenience anyone except for the 6 people that live there, and I’m sure we could come to some agreement on access for them. I’m all for making some shared spaces – hopefully better quality than the dire Lower Cuba St precinct, which has been a dismal failure for the Council. This particular street could become a shared space very easily, with just a bit of traffic on Sunday morning when the Sallies are in full swing.

He also wants to make College St into a shared space as well, which would actually be much more difficult – it has a lot more traffic, is already genuinely two-way, and caters for the considerable amount of Moore Wilson traffic. But there is no doubt that it could be seriously improved from the acres of car-filled asphalt that it is now.

And then there is the other idea, released on the Dom Post today – an outdoor thermal bath on the waterfront, next to Freyberg pool. An outdoor pool is not a new idea here – there was one before the Freyberg was there, and from what Ive heard they even had separate pools for women and men? This one, as drawn, looks a little like it was recycled from Hawaii in the 1950s, with 3 little shares and a pile of exotic looking “rock” formations. This idea seems to have come from the pen of Pierre Emmanuelidis, who is the ‘designer’ in the collective (earlier Stuff pages had him down as an architect, but he has been downgraded to designer now). It’s not a bad idea at all – it does get rid of that hideous old tugboat, which would keep Tommy Honey happy, but it does immediately put the question – how would you heat the water, and who would pay the hot water bill?

The instant reaction, from the rabid right wingers at Stuff and Kiwiblog, are just rabbiting on about the cost. But think of the attraction! Warm water. Sea views. Palm trees. What’s not to like?

But what of this group? Seems a bit of an odd collective, to me, with a fondness for strutting up and down Ebor St. Mike Coles, listed here as a property developer, actually is an architect I think – a director at ArcHaus? It makes sense that Coles is in there, as he has developed some of the more successful small-medium developments in Te Aro recently, like Tattoo and Canvas. But what is the Acme cups manager Jessica Godfrey doing in there? Maybe she is the supplier of cups to Prefab? So what we really have is two people running a cafe, talking to two designer types drinking in a cafe – not quite a fully representative sample of Wellington urban living, but not a bad place to start. Let’s make it a wider collective, get more of a conversation going, and see if it can actually seriously influence Council to make the city living experience a far better place.

Standing on a corner, suitcase in my hand