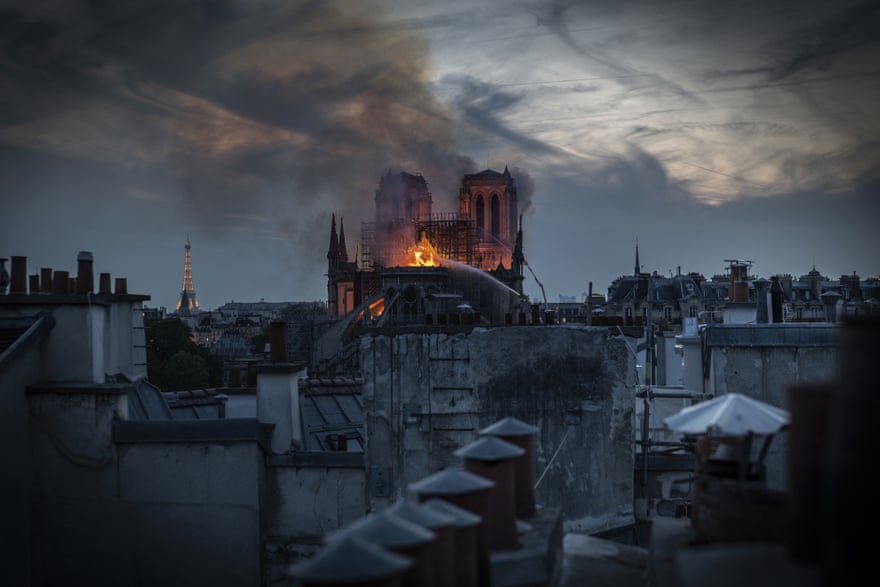 I woke up this morning to hear the unbelievable news that Notre Dame de Paris was on fire – and by tonight it was all over. Impossible to think that it could happen at first, and yet when you stop to think about it, it is a wonder that it hasn’t happened before now. 850 years old with barely a scratch, and then when you start to do some renovations, you burn the whole place down. Heads should roll over this (at least the French are good at that!). This building was started almost before humans ever got to visit Nouvelle Zelande, and really is one of the finest gothic buildings around. If you like that sort of thing… and yes, I do! I’ve walked around it, from the inside and the outside, from end to end, and top to bottom, and in one of these boxes under my desk I probably have a hundred photos of it, including from the rooftop. Which now is no more…

I’m impressed by the way that Macron simply stated that it would of course be restored, unequivocally, and it reminded me of the words of Gerry Brownlee after the 2011 earthquake – that we would “have to get rid of the old dungas” but that 4 or 5 buildings would obviously get to stay – being the Arts Centre, the Cathedral, the Canterbury Museum etc. As it was, and as we know, nothing is so simple and so short-lived as the truthfulness of a politician’s words – here we are 8 years later and the ChristChurch cathedral has not even been touched yet, and the Catholic cathedral is still just containers and hay bales. So: don’t trust Macron.

Will the next 8 years in Paris be stale-mated by a stroppy Bishop wanting to demolish the whole building because it is out of date and not what the congregation needs? Will the workers be banned from entering because the Health and Safety issues are too large? Will they insist that everyone wears a Yellow HiVis Vest, because that means that you are safe, or will they just get water-bombed by Police if they do? Will there be looters inside already, scraping up the molten gold that will have cascaded down the aisles as the roof collapsed inwards? I seem to recall a fair amount of Catholic Gilt, as well as the usual amounts of catholic guilt.

But who could ever have foreseen this coming? I mean, 850 year old oak beams, with 200 year old varnish, in a building where hundreds of small candles are lit with live matches every day, next to old dry fabric wall hangings… and no one ever thought to put in a sprinkler system? Or to start a restoration project up amongst the timber works and not have a instant deluge curtain built in while they work? Did they have weekly fire drills? The firemen, apparently, took hours to arrive, instead of minutes – or even seconds. In NZ, working on a project like this, we would have to have a Fire Warden on duty, no? Or – did we try this already – didn’t we burn down part of Parliament in NZ while we were trying to work on it? Did we in fact do that twice? Once last century, and once the century before that? Didn’t the Scots manage to burn down the Glasgow School of Arts twice, the second time rather more successfully than the first?

What is the first rule of restoration work then? Surely it should be:

First, do no harm.