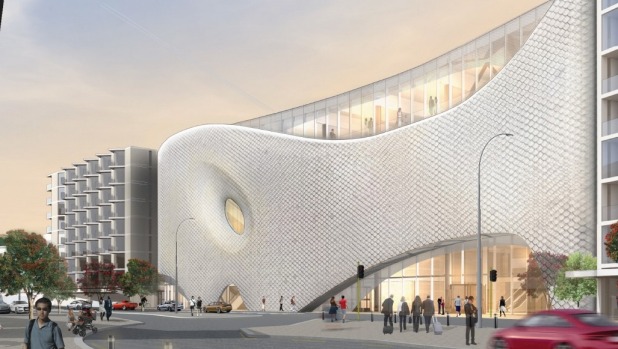 Well that’s a welcome wakeup call – options for a blinging new face for the proposed movie museum and conference centre in Wellington. Talk about Bling bling! And unlike yesterdays post on Erskine, today at least the architects are named, so we know it is by Studio Pacific Architecture, and that tells us that the results should be pretty good. And here it is:

We spoke about Studio Pacific coming on board at Christmas last year, and it is interesting to read back on the comments at the time – people expressing hope that with that team, we should get some pretty exciting results. And with this proposal, we certainly have.

Of course, with a proposal looking not unlike a blindingly white fish with a large eye, there is no reason on earth why I’m not going to like this proposal. It’s Maori mythology, its the head of the fish, it’s Moby Dick and the great white whale all rolled into one – and it is the name of the blog that Philip started ages ago, and that Maximus carried on for many years.

Here’s the other side of it for your delectation as well:

Everyone loves a shapely backside, and this looks like Marilyn Monroe in a tight white sequinned dress. Delightful. I wonder if it will shimmer in the wind, like one of those old signs, or one of those shimmy dresses that girls wore in the 90s…

Back in 2014, there was another proposal, by a different architect/developer team, and it had a Hilton Hotel on the roof – big glass expanse looking out over, well, actually looking out at the side of Te Papa. Then the Hilton pulled out, and the developer jumped ship, and the whole thing was looking rocky for a while.

I think that a worry was that if the Convention Centre was built without the Hotel on top, the whole thing was going to be a bit of a short stumpy piece of infill. Miraculously, the project seems to have grown enough in height so that it is no longer an issue.

But there is a catch with this: as a Council funded proposal, there is an option. Either have a scheme which can fit the budget, and look a bit simple, or pay a little extra, and have a scheme which blows you away. I know which I prefer, but for those who are dour and penny pinching, here is the option:

That, I think, is the front, a fine, simple, modernist structure. Here is the backside:

I know which one I prefer – what do you think?