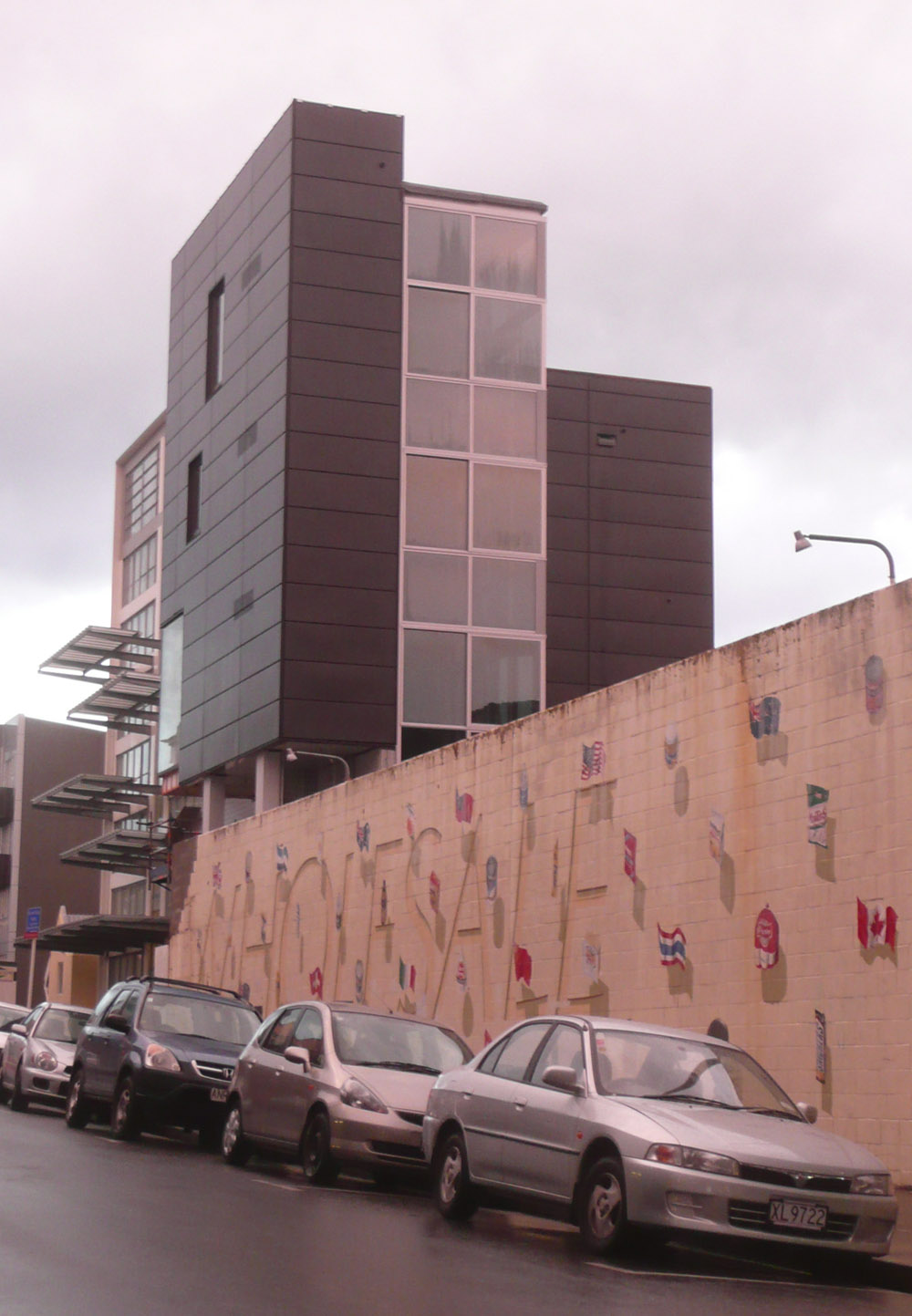 At last: a return to what this blog was set up to do – a review of a local building. This one is really aimed at keeping DavidP happy, who has undoubtedly noted this progressing along. It is not quite finished yet, but is forming a much needed edge to the formerly neglected corner of Tory and College St in downtown Te Aro.

We’re talking of course about this building, a rebuilding of the iconic (oh come on, really, it WAS) corner turret of Moore Wilson’s. I haven’t seen a sign on it, but it surely must be an Athfield job, as they have been the architects on every square inch of the Moore Wilson emporium since, well, way back in the day when MW opened. Well, ok, not the 1890s or so when Mr Moore and Mr Wilson got together (need to check my facts), but I’m thinking – since the 80s when Athfield dreamt up the whole ‘after the quake’ scenario for the design.
The giant wedge splitting the wall, and the post-modern turrets to the west facade date from this time, along with the former corner (now demolished) which had the visual joke of subsiding down into the floor below, at a jaunty and crooked angle. That joke had got a little stale over the years, and the tilted box was chained off and getting vandalized over the last few years, so it is good to see a new solution in this corner.

As a zinc? finished box, playing slightly with volumes, it looks almost tasteful and restrained by comparison with its former self, yet there is still a few questions left for me. Like:
What is it?
Is someone going to live there?
If so, their front door step and view will be – a car park ?

The volume appears as though it could be small apartment size ish, and there is no doubt that it will enjoy good all day sun, and unobstructed views, with the world’s greatest food store on the doorstep for good food foraging. But while I do love the urban life, even I might object to living in a car park. I had expected something to happen on this corner for sme time, especially since the completion of the east side of Moore Wilson’s, but I guess I thout this edge might have had more happen to it than just a solitary tower.

A cluster of apartments perhaps? A redesign from the ground up, doing away with the worlds worst and unnecessarily complicated car park entry, but not touching the best small urban courtyard in Wellington? One solitary zinc-clad tower was not quite what I expected, no matter how much I appreciate it’s pretty proportions.