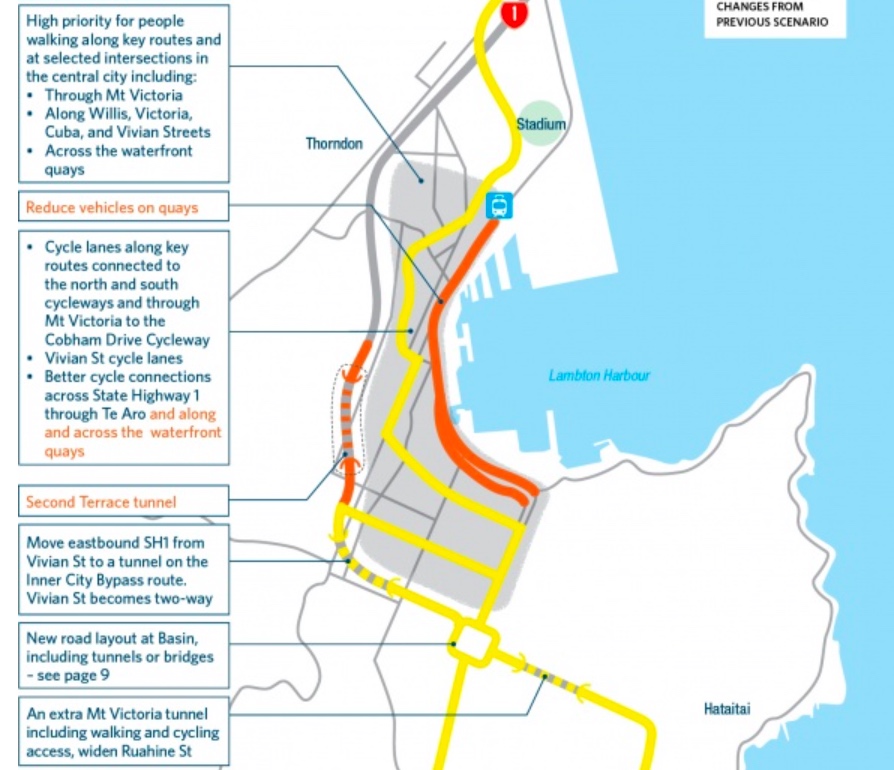 A recent article in Wellington SCOOP refers to LGWM as if it is a done deal. “Hold on” I exclaimed inside my head, as I sat gripping my laptop in my wet sandy hands “when did this happen?” – followed swiftly afterwards by a thought “Have I slept for a hundred years? Has something happened while I’ve been snoozing at the beach?”

Well, dear Reader, not quite. It was a comment from GreenWelly, who comments here quite often. (I often wonder – is Green Welly a Green MP for Wellington? – Nandor Tankzos perhaps? Gareth Hughes? Sarah Free? I have no idea). Anyway, thanks Greenwelly, you gave me a link to the NZTA minutes from October last year, where they noted:

“Board Members agree with the Recommended Programme of Investment (RPI) as a programme business case, but note that the Transport Agency is not in a position to commit to the RPI progressing to the next stage, or the implementation of early improvement, without further work being undertaken around funding and financing arrangements. Further, greater certainty is required in terms of the cost and funding arrangements for the Auckland Light Rail projects; firm commitments from Councils for Let’s Get Wellington Moving;”

So – Resolution 8 : The NZ Transport Agency Board:
a) Endorsed the Let’s Get Wellington Moving (LGWM) Recommended Programme of Investment (RPI) as a programme business case.

b) Noted ‘endorsement’ indicates a commitment to develop the LGWM RPI to a stage where it can be implemented, but does not commit the NZ Transport Agency to fund that implementation, in whole or in part.

d) Notes the need for significant further work on the feasibility of funding and financing arrangement for LGWM, in conjunction with similar and coincident requirements for the Auckland Rail Project.

e) Agrees there is a need to understand the entire commitment required for LGWM before embarking on the next stage, which includes detailed business case preparation, and implementation of early improvements.

Now – while I’m not quite sure what all that means, Greenwelly thinks he has got the gist of it, namely:
“NZTA have decided what they want, itâ€™s simply that they canâ€™t find the $4 billion they think it will cost..
Resolution 8: The NZTA Board endorsed the LGWM Recommended program of Investment, but then basically said we donâ€™t have the money to do what we want to doâ€¦. and until funding is found we cannot proceed to a detailed business case. (Page 13-14) So Iâ€™m guessing itâ€™s now sitting on the Ministerâ€™s desk as he attempts to get the MP for Wellington Central to let him have some more money.”

I think that is probably right. NZTA have evidently seen a report from LGWM, which has had a QS run a number past it (in the order of $4 billion, i.e. two to four more projects the size of Transmission Gully). The BCR stacks up, just, depending where you get the numbers from.

Then it gets interesting: “in conjunction with similar and coincident” Auckland Rail, i.e. so they actually ARE looking seriously at some form of Light Rail for Wellington, and importantly are discussing it in the same breath as Auckland. The obvious, sensible thing to do would be to purchase the same type of system and cars, so that there are common materials, parts, drives, bogies, signalling and even drivers. That would be forward thinking and could bring costs down. On the other hand, it would lock us into one supplier – great if you pick a good supplier, bad if you do what NZ normally does (i.e. pick the cheapest deal and get a lemon).

Four BILLION is a lot of money to be discussing. My thoughts are that instead of NZTA keeping that report to itself while LGWM spend the next year implementing a “detailed business case preparation”, and seeing as they are waiting for the Councils of the region to decide to help fund it, the LGWM plans should be released to the Public now. Either LGWM could release them, or NZTA, or WCC, or GWRC. I don’t really care where they come from – but the public need the opportunity to see what is being proposed.

How to “Mate” your building