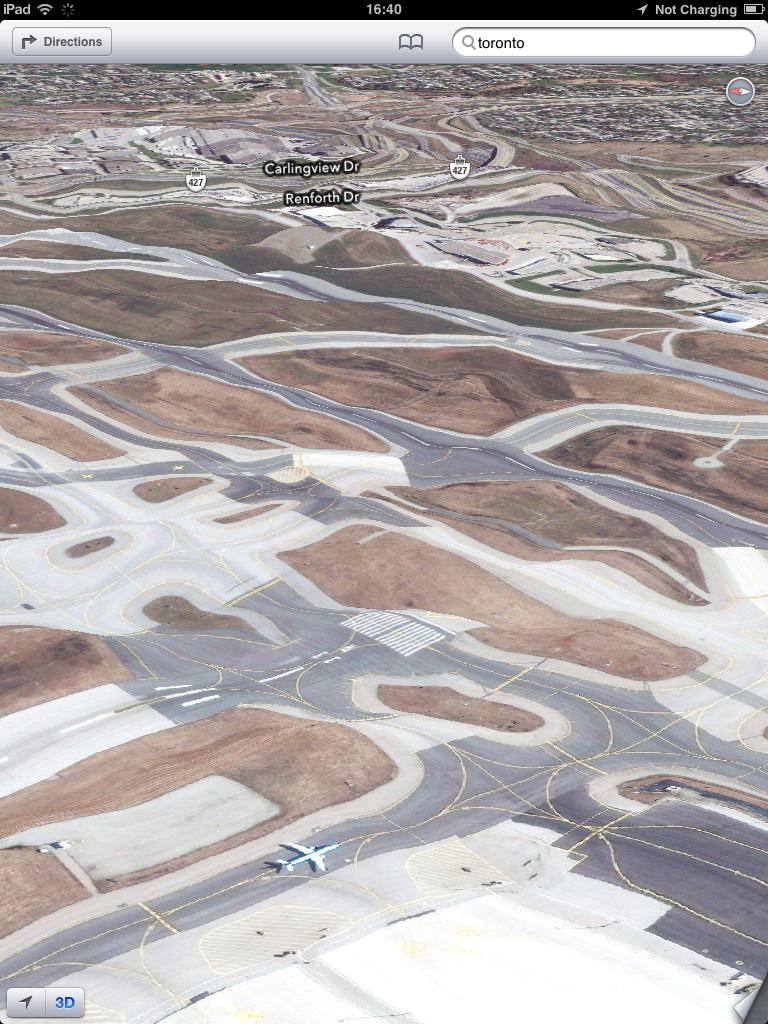 We tend to take technology for granted these days. No longer do we have to carry a spare pint of oil or a spare fan belt in our cars, no longer is it necessary to have access to a map book when we go to visit an old forgotten aunty. Nowadays, modern wee technocrats that we are, we’re surrounded by technology, and it just works, dammit, near perfectly, all of the time. So much so, that when on the rare occasions that it goes wrong, we make a big song and dance out of it. Like the cat that Keanu saw in the stairwell in The Matrix, it is just the tiny glimpse of something not quite right that shows us how much of reality we now take for granted.

Take, for example, Google maps. It has only been around for a few years, but already we take it for granted, that it is perfect, up to date, and always there. Google Streetview is much the same – even newer than Maps, and apart from the irritating and mind-boggling automatic deletion of features of all the human faces in the world within Streetview, it is staggering what we can see.

Even more mind-boggling is the new feature from Apple, with the 3D version of their Maps – this technology is incredible – in America, at least, it seems as though every building has been photographed, and built as a 3D object, and then mapped with the photos for a seamless presentation of a 3D city. So – this varies hugely from Google’s Streetview, where googlers drove around in cars capturing data. Here, in Apple land, somehow, and I’m not sure how, the entire building is built. We are yet to see if NZ gets 3D maps or just the 2D data when the iPhone 5 launches here in a week or two. Some of you with flash iPhone 4 may have already upgraded to iOS6 and be able to tell us: how is it working for you? Regardless: free from the effects of the renown Steve Jobs Reality Distortion field, there evidently haven’t been enough sackings for poor performance lately, because: Someone screwed Up!

Yes, as all you technerds out there will have noted by now, the software is not working perfectly. The maps data is not current – blame Tom Tom for that. Worse, teh mapping function does not always get it right – getting confused in the case of bridges especially, it seems. Witness the great chortle of delight from the PC / Windows / Android world, where anything that ever goes wrong with Apple is always taken as a chance for great mirth. Of course, as I am a die-hard Apple fan from way back (you do not want to know Just How Far Back i can go…), then I am not interested in sticking the boot into Apple. They have always been leaders in the game, and here they are again, leading with a new technology.

What is really interesting to me, however, is that some of these cracks in the Matrix are showing. We are getting to see through to the logic (faulty, it seems, at times) of the Machine behind the Matrix. The mapping software has been told to automatically model the maps onto the contours – but what happens when a bridge crosses high above the water map below? We see the resulting confusion of the machine trying to make sense of it – blurring the edge between two competing sets of logic parameters so it seems. Instantly, our human brains perceive the illogical impossibility, and those of you with Samsung phones are all chortling away in your cups – but quit your snorting for a second, and think of what we are really seeing here in these pics.

The days of having to find a data file of neighbouring buildings, and painstakingly build up a grey anonymous blob of 3D building are now over. From now on, with a bit of luck, Wellington will exist in 3D the same way that Washington does. People in Christchurch may even be able to see their city as it was, once more, complete in 3D, before it is updated and ruined virtually as well as physically in a post-Earthquake update (Google-streetview still shows the old city surviving, in both 2D and 3D, but probably not for long once the last red-zone barriers come down).