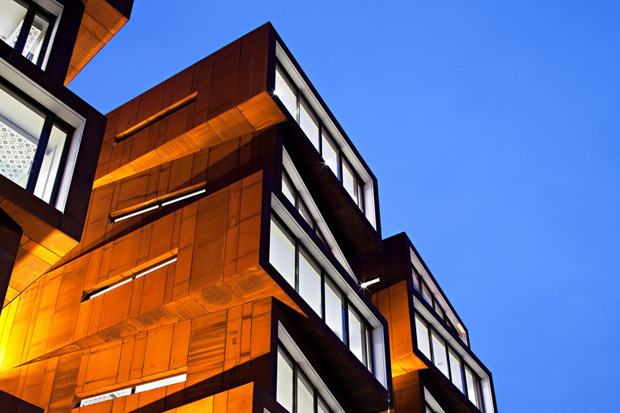 Top prize in the NZIA New Zealand Architecture Awards last night in Auckland went to Ironbank, by RTA Studio. Fantastic building, stunningly iconographic, and well-deserved. It’s a tour-de-force of the art of the architect – yes, agreed that perhaps the structural logic could be argued to be, shall we say, “overly complex” – but its a building that you just can’t help but like. The dark, rusty red exterior takes the cake as well, with the sun hitting it it glows, and the steel cladding (Corten?) has a crispness that goes well with the boxy shape. Massive congratulations to RTA, and their Engineers (who are?), and of course, most of all, to the client, Samson, who paid for all this.

It could be argued that this is the first real modern piece of architecture in Auckland. Maybe that’s Architecture with a big A, and modern with a small m. Up until now, the commercial architecture of the Queen city has been unmitigated dross on the whole, much as is most of Wellington. Finally, there is now a reason to go to Auckland, just to see a building. I mean, you’re not going to be rushing up there to see the Aotea Centre, or the Price Waterhouse building, or the Vero Centre now, really, are you?

But it is also notable that most of the projects awarded NZIA New Zealand Awards for Architecture (the runner up to the New Zealand Architecture medal that Ironbank got, which is the real gold medal prize), are from Auckland. There was not a single award for a Wellington building, even though Gerald Parsonson, the lord chief justice of the awards jury, is himself from Wellington. You can read the full list here, on the NZIA website. As usual, commentary in the Stuff daily papers is pretty poor – one tiny advert in the DomPost yesterday, and a whole swathe of photos in the NZ Herald.

It’s a timely reminder that we have yet to pull off something similar in terms of world class quality in Wellington. Hmmm, people come to Wellington to see the ground where hobbits walked, but will they have been coming here to see the Maritime Tower, or the new BNZ centre? Meridian building maybe, but in terms of tall towers, we’re pretty vacant really.

Actually, speaking of pretty vacant, there is a fairly amazing difference between Auckland and Wellington in terms of office vacancies, and the attitude towards the letting of space. There’s a building at the bottom of Queen St, just called 21 Queen St (formerly Downtown House), which has just been massively refurbished by Peddle Thorp, and yet it is still unlet. Perhaps, even, apparently, unlettable – as it doesn’t have carparks. That’s a scandalous state of affairs – that the idolatory of the car is so ingrained into those ingrates up there that they won’t rent the building unless the boss can drive to the door – after all, it sits directly opposite the main Britomart railway station in Auckland, has a million buses departing every day on its door step, and a fine fleet of ferries just a stone’s throw away, and yet the lazy-arse Aucklanders won’t take it on because the basement isn’t there for their beemers. Sad, sad, pathetic city.

Is the Profession of Architecture Corrupt? Well, is it?