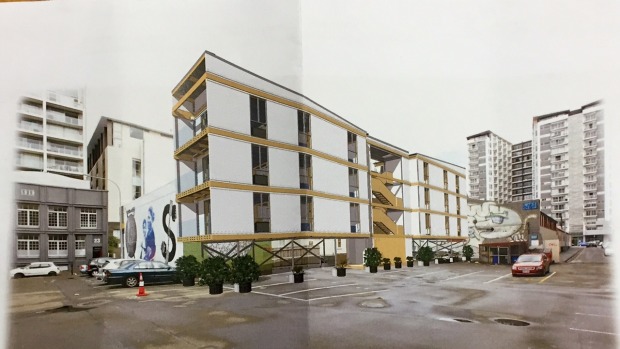 The announcement last week of Ian Cassells’ latest infill housing scheme is an interesting development. Cassells has talked about his City Blox idea before, with a demo unit parked at Shelly Bay, and proposed them for Christchurch. But this time they are coming to the St James.

Cassells is one of the few developers who really does put his money where his mouth is. He has successfully used relocatable houses in urban situations before – when he had housing in Boulcott St, which stood up on some ugly looking stilts for a few years before that site was transformed into the Telecom building (now called Spank). Those buildings, sans steel legs, are now happily esconsced in Abel Smith St, although I’m not sure if that is a permanent home, or just another temporary home.

He has a great track record of innovative buildings in Wellington, some architectural tour de forces, some less sophisticated, but still innovative none-the-less. His track record speaks for itself. The Telecom building is a Wellington classic already, with a brilliant, edgy design by architecture +, easily my favourite of his work. The future of the Erskine College sits in this man’s hands, although its not looking bright. The Shelly Bay scheme was, shall we say, not a brilliant PR success.

But the St James is a much more high profile site. Predictably, some people don’t like it, almost as an instinctual kick-back. WCC Councillor Nicola Young was one of them, calling the scheme a slum before the scheme had even been presented to the public.

“But Te Aro resident and Lambton ward councillor Nicola Young said residents were concerned it would become a slum, inhabited by drug dealers and visitors from next door at The Mermaid topless bar and attached brothel.”

“While I agree that a car park isn’t the best use of the land, it’s better to do nothing than make a mistake like this one,”.

I’m interested to know – is she right? Is it better to do nothing than to build temporary housing?