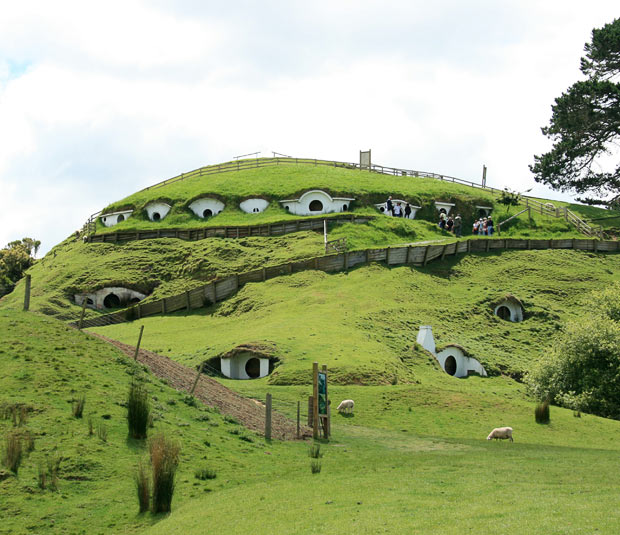 “In a hole in the ground there lived a hobbit. Not a nasty, dirty, wet hole, filled with the ends of worms and an oozy smell, nor yet a dry, bare, sandy hole with nothing in it to sit down on or to eat: it was a hobbit-hole, and that means comfort.”

So, after a week or two of stoush, the waiting is over. Just as we all (all?) wanted, the two Hobbit films are to be made in New Zealand. Presumably, the first film will simply be called ‘There’ (and, obviously you can see this one coming from a million miles away, the sequel will presumably be called ‘Back Again’). I am happy, but not exactly overjoyed – after all, there is no part for me in this film, despite auditioning for the part of Shelob, or even a small bit part as one of the fish that Smeagol eats – it’s not exactly the most fish-friendly of film fare.

But that’s neither here not there – short of Figwit making it big, and Urban making it massive, the sheer amount of rubber and armour allegedly makes it a little difficult to spot yourself in the vast armies of Mordor. Of course, if 3 foot six casting wants to give me a ring (ho ho), and offer me a part, I’m sure we’ll be able to work something out.

The real long-lasting reason that the Hobbit is such good news for New Zealand, is that weirdest one of all – that overseas tourists come here looking for hobbits.

Aside from them having been found nowhere except on the island of Indonesia, and then only as some old bones, we’re not really renown as a place for finding small, round, hairy footed people. Large, hefty, troll like behemoths more likely, although the hairy footed part may be more accurate. Jackson’s own two children feature in film one of the LOTR of course – merry little munchkins munching luncheon in the dungeon – and his highness Sir PJ himself made at least one appearance in each film (shown here at the sign of the Prancing Pony, now snooty housing in Seatoun), and I’m picking that there will be a couple more cameos in the next films as well.

But the slightly sad thing is that the entire worlds of fantasy architecture which seem so real in the three LOTR films are nowhere to be found. Somewhere in Miramar sits a massive shed full of old polystyrene props (hopefully not the one that went up in flames last week), which is all that remains of the days of the Ring. The heavily hinted at Kerry Prendergast / Peter Jackson museum of film paraphenalia never came about.

In Matamata, the stand-in for Hobbiton down Under, the previously polystyrene world of Hobbiton that was kept under such wraps last time, and then studiously demolished prior to launch of the Fellowship of the Ring, is luckily this time being constructed for real. That is real as in: real concrete, real round doors, and real stone bridges, although I’m not sure if the large party tree will be real or fake once more. Matamata, regardless, now has it’s tourist future assured.

But what about the other locations? The poor little flocks of Japanese tourists that roam the country in their massive tour buses, pausing only to stroke a lamb or pose in their Elvinrond garb of tasteful grey merino, will look in vain to discover the wonders of Minas Tirith or Menas Morgul.

Mt Doom’s fortifications were erected on carpet halfway up the mountains, and then carefully replanted later so that not a skerrick of polystyrene history remained. Which, in a DoC kind of cultural blitzkreig way is kind of understandable, but in a family friendly and tourist trap manner is a real shame. If only that mystical city of Edoras had been left atop that craggy mound in the deep south – or that Elvin architecture still graced our QEII Park in Paraparaumu.

It is, after all, not as if our own architecture is of such stunning stature that its beauty must remain unsullied. Cough, splutter, hack – far from it. It is arguable that the best architecture our country has ever seen has been rendered only digitally and in painted polystyrene, rather than in stones and mortar. It is telling indeed that all the architecture looked so real, and yet not a single building was used as a set – everything was created from scratch. Compare that with most other modern fantasy films – say, Batman, where nearly every building is a real location in New York city, or in period dramas, where any number of old buildings stand in for backdrop fodder.

But here: nothing. While on the one hand that is part of the success, creating worlds where none existed before, is there something more longer lasting that we as a cultural capital can get out of the deal with Warners? Should we not be reinforcing the tourist take on Tolkienesque imagery, and digging some hobbit holes of our own in Wellington? Can we get PJ to construct at least one of his fantastical creations in concrete and stone for real, instead of just creating polystyrene palaces once more? Should our sign on the hill not say Wellywood, but Hobbiton-on-Sea?

A Gesture to Melbourne