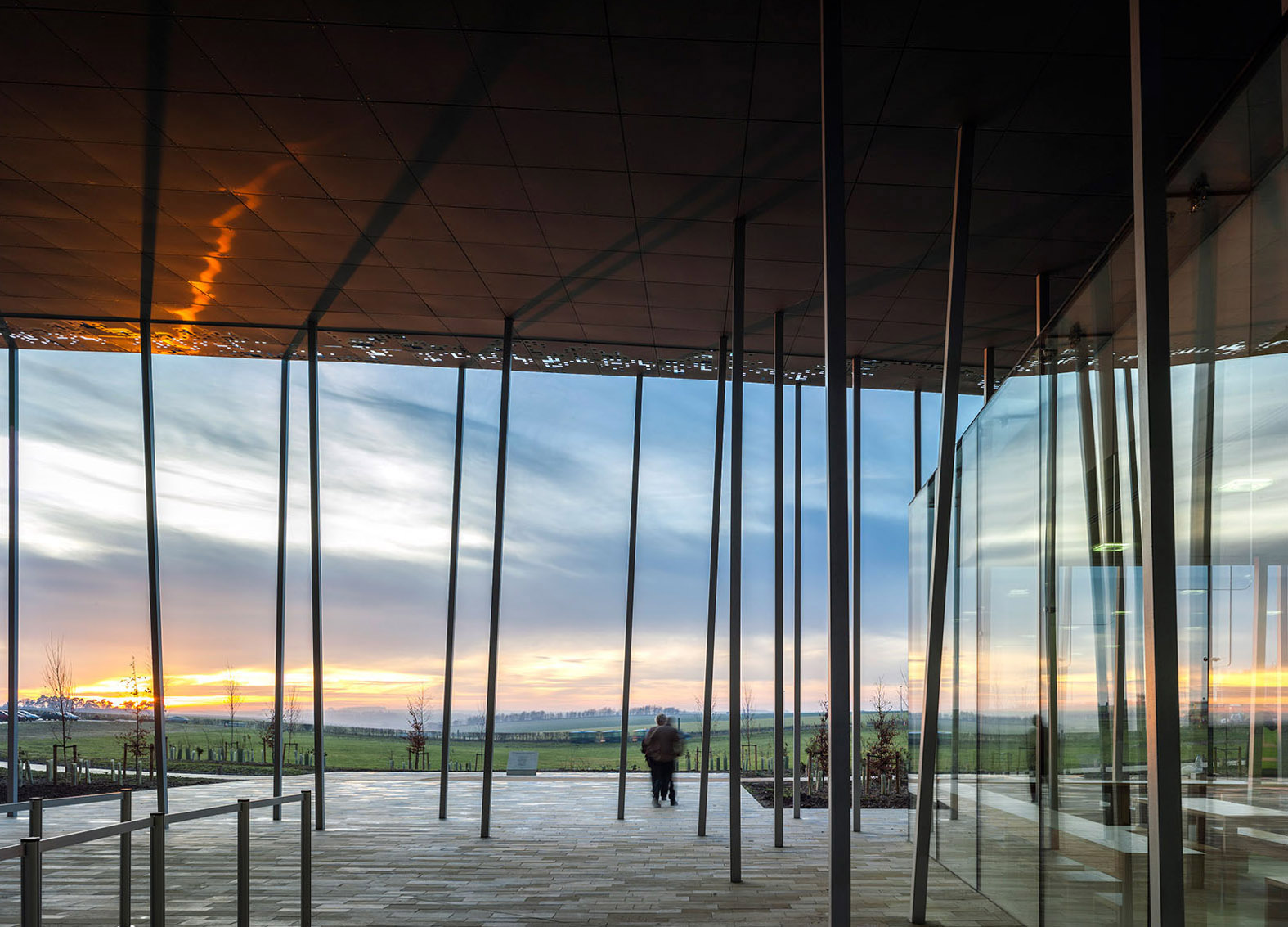 Greeting Scenes at the Pleasantness of Druids

The following project has been a long while in the making – either a couple of decades, or a couple of thousand years, depending on your take on it. Its a long way from here, but ancient Druid customs and long-forgotten burial rituals demand some respect. Amazingly enough, in the heart of the most ancient Celtic / Neolithic / English countryside of all, it’s an Aussie company that has created this tribute to the pleasantness of Druids. Denton Corker Marshall has pulled off a beauty that defies prescription. Streuth, what a corker!

We are talking, of course, of a visitors centre for Stonehenge, in Salisbury, part of the most English of Englishness, deep in the heart of Wiltshire. Stonehenge is not the only henge of course – there are many henges dotted around the countryside in Salisbury: this is just the largest, most complete, and most famous, even if people are still not 100% sure how it was built, or even what it was doing there. Telling the time, yes, possibly. Telling the seasons and the day of mid-winter, yes, probably. Telling us a story of the history of druidic ritual? Priceless. Pagans, not Christians, worshipped here – not just for the millennia gone by, but even for our modern muggles. I mean, dammit, this thing is older than the pyramids themselves.

Up until a couple of decades ago, there were two local roads that crossed the Salisbury Plains and intersected almost on the doorstep of Stonehenge. One road (the A303) took you on a route directly towards the ancient monument, diverging at a fork in the road to let you pass by a small distance away. Lorries and coaches (English for trucks and buses) rumbled past on a regular basis, disturbing the feeling of serenity that the circle somehow begets. The other road (the A334) went zooming right past the edge of the henge, almost bisecting the circle, and allowing a fantastical fleeting drive-by visit to the most ancient of druidic monuments, allowing you to almost touch the heelstone but denying you the chance to stop. It let you stop on the other side of the road, park your lorry or coach, buy a packet of greasy chips from a sweaty man in the back of a van, buy a ticket from a broken down attendant, speaking in broken English, in a broken down portacabin: descend under the road and ascend directly into the most holy of unholy sites.

It was not a pleasant experience, and when you got to the site, you were still kept away by lines of barbed wired fences. Oh Lorde, protect me from such tackiness. Deliver me from Eden. Build me a monument, so that they won’t come. And so an ideas competition was launched.

The proposal they were talking about in the 1990s was to delete one road completely and to bury the other road in an underground tunnel, but with a projected cost of about 300 million pounds (from memory) that was a proposal that was never going to fly. For a start, digging a huge tunnel in the most sacred of areas, would have demolished who knows how much history. Years of debate and accusations followed. Heads rolled, of various heads of English Heritage, as well as the wheels of several thousand more trucks. It is the sort of a scheme that should have been still-born, just like the current Basin Bridge overpass scheme. Never get a traffic engineer to plan a sensitive response to a site of great heritage value.

Oh, now, how things have changed. While the A303 continues on its merry journey, still allowing you the sightline journey, the nearest section of road A334 has been thoroughly deleted, expunged from the sacred ground as if it never existed at all. That has unleashed a reassessment of the ground plain – and let’s face it, virtually everywhere that you dig round here, you have the chance of striking treasure. The old visitor centre has been (thankfully) demolished, and the new one built – amazingly, almost a mile away. Out of sight! Literally, and absolutely out of sight as well as out of site.

The current scheme, open for the first time during the northern hemisphere summer solstice, cuts the A334 short, and turns it into a cul-de-sac. The idea is that visitors, so enamoured of their ipods and gameboys, stare avidly at a series of wide-screen TVs to find out about the henge, and then, sated with pop-corn, fizzy drinks, and bags full of tacky blow-up Stonehenge ornaments, retreat to their coach, having never actually clapped eyes on the real thing. Interactive displays – “see how you too could pull a stone menhir for an inch or two” (when of course the original stones came over 150 miles away in Wales, and no one can figure out how they got here) suffice for actual wandering around the ancient stones themselves.

Most of the Brits, now (like us) too lardy to be able to walk the mile across the grassy fields to the henge, will be happy and can ‘tick that box’ that they have visited the site. Others, such as wealthy ancient and lethargic Japanese and American tourists will pay an exorbitant fee and be transported across the fields via a glorified Landrover towing some tastefully green caravans, taking them almost directly door to door. The overall idea is that actual visitor numbers to the monument will fall, drastically. Some people, a few, will walk through the meadows of this green and pleasant land, and discover their own version of times gone by.

Meanwhile, at the Visitor’s Centre, DCM have created a series of stick thin columns, all deliberately slightly askew, as if the centre was not a multi-mullion extravaganza, but instead has the impression of a rickety temporary pavilion set in the field, with a thin skin of netting hauled neatly over the top.

One the one hand it is such a British response, to build a (seemingly) flimsy building when you’re not sure what the right answer is – but it goes back to DCM’s ‘Stralian roots as well, with a fine tradition of Aboriginal bark dwellings erected temporarily by the side of an ancient destination for a walkabout.

It is, quite possibly, the best building that DCM has ever built: carefully crafted, despite its apparent mish-mash, bish-bosh looks.

It takes immense sophisticated skill for a completed construction to look so casual. There is a much more space, both in height and breadth, a more sophisticated processing of visitors for the inevitable toilet and refreshment stop, and the whole world is a better place for it, with the ancient stones left largely in peace.

Except, of course, at the up-coming Summer Solstice. This year, already the warmest that Britain has had for the last thousand years or so, is bound to be a big event. It has been a (recent) tradition that a Summer rave is held nearby each June, so that the would-be hippies and brain-addled ravers can dance the night away on the longest day, revelling in the cosmic power of the ancient dudes – i mean druids – and getting stoned in a massive summer of love party.

There is an inevitable clash between the Druids (who some allege are real, others say merely wannabees) lead by Arthur Pendragon, and the travellers (still dancing to acid house despite the 20 year time lapse), with the Police inevitably taking the side of English Heritage (the “owners” of the Stones) and trying to stop revellers chipping off a piece of ancient ornament to take home and worship.

Given that just last year a team uncovered some 50,000 human bones on the site, with some of these ancient remains on display in the Visitors Centre, the neo-Druids have got all up in arms, and are protesting madly. Return the bones of our ancestors! It is a refrain which has been heard at the other end of the earth, more than once. Who owns the right to exploit Stonehenge?

In the mean time, the other henges sit in fields nearby, mainly ignored. The village of Avesbury, home to the famous Avesbury circle, is sited smack bang in the middle of a circle of tiny stones, and sheep and cattle graze contently in the presence of the greatness of millennia. There’s a Woodhenge as well, as well as other stone circles all within a few stone’s throws of Old Sarum. Its an ironic side effect of Wiltshire being the home of the British Army, that development of the land near here is largely restricted – and so it is a wildlife sanctuary (de facto) where the voles and badgers can play undisturbed by chavs on horseback or hatchback. Other madness can go on there, relatively undisturbed.

Go on, go crazy this solstice – you know you want to!

Whitireia’s keen on the Presence in the Mall

Groin Screens and the Presents of the Droid