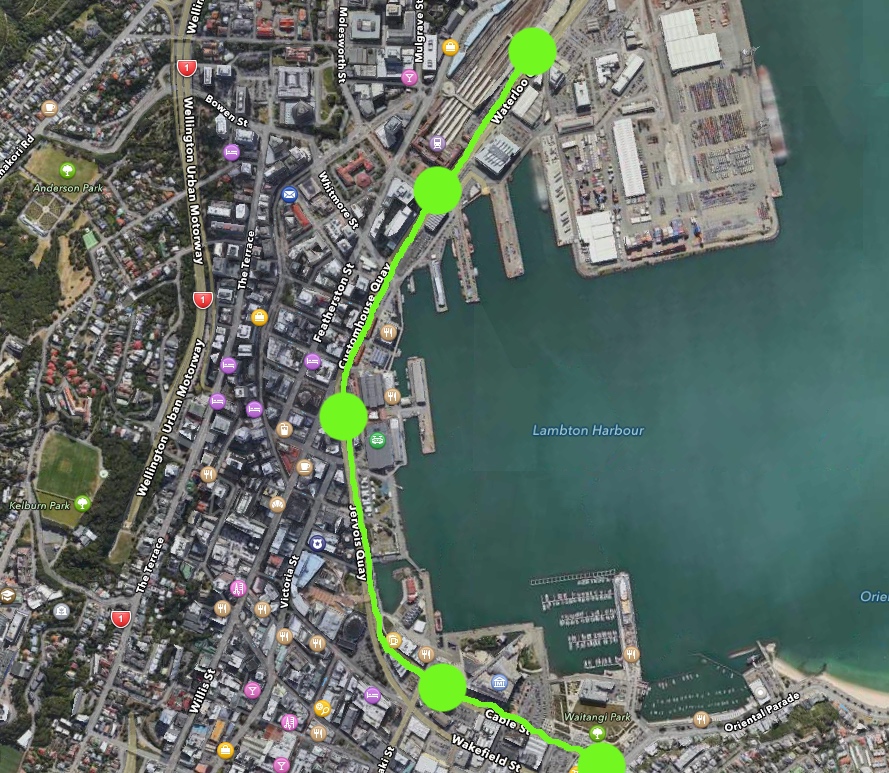 Getting a Move on

Let’s Get Welly Moving is the regional agency based collaboration, tasked to sort out Wellingtonâ€™s transport woes. It follows on from the debacle over the failed Basin Bridge proposal, when NZTA decided we would have a “choice” of Flyover A or Flyover B, and both WCC and GWRC sat on their hands and pretended that the problem was “nothing to do with me, mate.” Letâ€™s Get Welly Moving (hereafter referred to just as LGWM, but composed of TLA or FLA like WCC, NZTA and GWRC) is due to report back to New Zealand in the next week or so, with some hopefully brilliant solutions to our transport issues. Fingers crossed.

(Red = the cars and trucks choking up the city)
Of course, the great thing is that LGWM has actually done some half-decent consultation this time, instead of the pretend “consultation” that NZTA did last time. I want to stress that it is not the fault of the people – it is the organisation that screwed up. I have ended up meeting various people involved in the failed NZTA bridge scheme, and without doubt all of them were really nice and you can have a good conversation with them off the record. Well, perhaps not Selwyn Blackmore, who really seemed to swallowed the party line hook and sinker, but most of the other people were great. Many of them were consultants from other companies, and most of them have moved onto other projects – some to the Transmission Gully project, some to Auckland projects, some perhaps to a Cycleway – anywhere a bike is welcome (obviously that excludes the toxic Island Bay charade). But I digress. Where was I?

The half-decent consultation was a little too simplistic and patronising but did at least give some impression of being interested in hearing what your opinions were. It was cleverly worded so as to never say “what do you think about our last idea for a flyover, eh?” and nor did it say “would you like Option A or Option B?” but instead it said “How do you get around, mostly?” and “What do you like to do in the weekend then?” etc. No question to which you could say “I’d like flyovers with that please” nor “No cycle lane to Island Bay thanks.”

(Blue = the pedestrian paths of people wanting to get down to the harbour side – as you can see, this really conflicts with the red lined map above)
What we here at Eye of the Fish are hoping for is that LGWM will offer up some genuine decent strategies for Wellingtonâ€™s transport, and top of that list, for me, is a decent Public Transport spine. It has become crystal clear for me over the last few years that the answer to our transport issues is not more roads, but lies in a solution with metal tracks, separated from the ordinary road traffic. The three “options” originally talked about (bus, bus rapid transit, or light rail) in that badly written, badly stacked report from accountants Price Waterhouse Coopers (the same idiots responsible for the Oscars cock-up) were clearly answers to the wrong question. You can’t have an Bus Rapid Transit going down the same roads and through the same tunnels as ordinary cars and trucks, or its just not BRT then – its just Buses. Thatâ€™s why, three years down the track, WCC have made no moves towards having a BRT anywhere. Zero progress. Nada. Zilch. Zip.

The crucial point is not, for me, the Basin, but instead it is the interchange at the main Railway Station. Grand Central, if you would. At present, as you know, all trains stop together (brilliant) and all buses start (via a short tunnel walk away). Personally, I think that needs to change. Personally, I think there needs to be an interchange to another line which can continue on, down through the City, through Te Aro, and on to the Airport. That needs to be the total, absolute minimal starting point for any city transport planning. No arguing, no prevaricating, no more pissing about – just bloody well do it.

(Green = Eye of the Fish says “Light Rail here, NOW” – straight and fast)
The interchange is the key to making this work. At present, everyone disembarks from the trains, theres a bit of faffing about getting off the trains, then the walk through the subterranean tunnel, and then the wait for the bus in cramped outdoor conditions. Some people walk on from the station, some wait for a bus, some get a taxi. But not everyone really wants to leave the train there. If only we hadnâ€™t axed the Te Aro Railway line back in the 1920s! The key, to me, is that a new line (whether heavy rail or Light Rail or Tram or Train I donâ€™t really care) needs to be on a separate alignment so that it cannot get blocked by cars (nor block cars itself). It needs itâ€™s own corridor, and services need to be swift, steady, two way, safe, reliable, affordable, integrated, and frequent. I’d propose that a new station be set up about near the Stadium, where all lines could safely stop, and let passengers cross seamlessly directly across a platform, and the Light Rail (letâ€™s just call it that for simplicity’s sake) can then descend down, under the main urban road (Aotea Quay) and up on the other side. Next to Centreport’s sorry sad piece of land. But crucially: uninterrupted by traffic. Whether above ground or below ground or at ground, I really can’t say, and again, I really don’t care, but I strongly believe we need a route as straight and direct as possible. That rules out the labyrinthine route weaving between the Lambton Quay office blocks, especially at Stewart Dawson’s corner, which has been the sticking point in this city’s plan since about 1840. You would need to have probably only 2 or 3 stops in the city – one at the main Station, one near Te Papa, and one somewhere in the middle. From there it would sail on (ok: speedily rattle on) down to the bottom of Courtenay Place, then curve round to speedily track down Kent Tce, under the Basin, on to the Hospital, and thence either up the hill or under the hill, over to Kilbirnie and onto the Airport, perhaps even doing a giant turning loop under Miramar and picking up those legions of Weta workers. It really is that basic and that simple. Do that, and we can save Wellington.

(Orange = current Bus route, and future bus route too – slow, congested, and a pain in the ass)
The importance of doing this now is that in 4 years or so we will have a giant superhighway of cars heading into the city from the Kapiti Coast via Transmission Gully, and as the city wonâ€™t be able to handle the flow, they WILL clog up and cause havoc. If you’re stuck in that inevitable traffic jam (thereâ€™s nowhere for them to park, either in parking buildings or on the street) then you’ll be fuming – but if we have a LRT system in place, we can speed by and laugh. We need a system that can work in the future when the oil (eventually) runs out or when electric cars litter the ground (cars are still cars – they will still congest the city, whether petrol, diesel or electric), and we need a system that can work when the harbour is one or two metres higher. We really do need to plan for these things right now, while we still have a clear path and we still have time to plan.

So: anything less than grasping this particular nettle by the stalk, like I have above, and LGWM will be a costly failure and a waste of time. We need a solution for the future: for all possible futures. There’s mine: what have you come up with LGWM? Time to show and tell!

Post-script 16 March:
Following William’s comment below, I’ve drawn up a version in Pink (with Purple bits) to show the clarity of the route down Featherston St (and also the potential clashpoints / crossroads in purple).