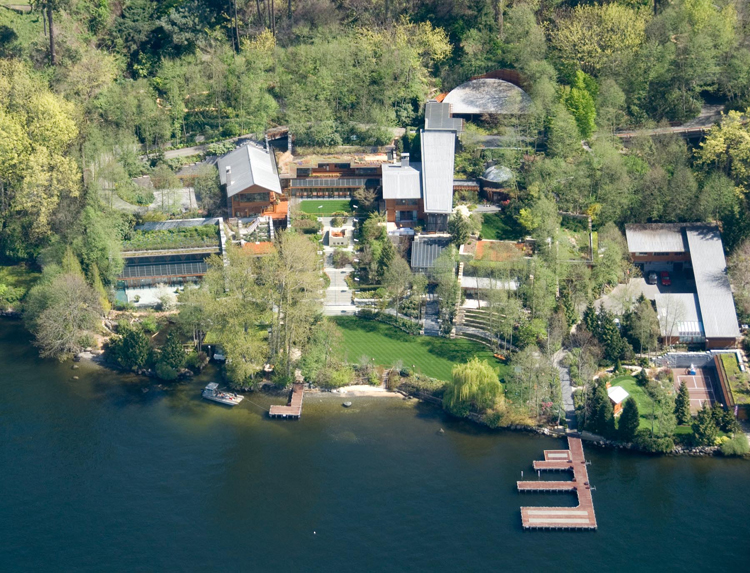 Had enough of talk about bus lanes for the present? Thinking of summer holidays and Christmas presents? In a slight change of tone for this blog, I thought you might be interested to see what sort of house people might build where money truly is no object.

Yes, I know that some architects always behave as if money is no object, but in most cases there is always a budget that has to be strictly observed. But what if you’re one of the wealthiest people in the world, and you can do what you damn well like? Say, like Bill Gates, who is giving away over half his fortunes of zillions of billions, and still doesn’t know what to do with it. For a while in the 90s he spent it on a house. A modest wee thing, with large amounts of parking underground, and a large fish tank I hear. Pictures, you want pictures. Very well – the Fish goes fishing.

There, that’s a nice quite view, “Xanadu” house nestled amongst trees on the shores of Lake Washington. Nothing too extravagant there. Much like the Windows program the world uses – a nice front cover / home page, hiding all the workings behind the scene. Wikipedia says it is 6,100m2 and valued at US$147 million. But what if we were to, say, jump in a chopper and fly up a little, to get more of an idea how big this house is?

Gosh – that’s a little scary. Like Windows itself, there’s a large mass of disorganised planning and bolt-on additions hidden just behind the surface. It cost millions and millions and kept on growing in a bloated fashion. There’s a picture on the web of a fish tank purporting to be Bill’s – although I don’t really believe it. It just seems too big, and too uncluttered, but it could be where old Bill got the idea for the Windows “blue screen of death”.

Yes, exactly – amusing, but highly unlikely. A whale, a shark, a dolphin, and a diver, all happily swimming together – naaa, I’m not buying that. It is hard to know what is true about this house – one website, where you can ‘take a virtual tour’ (no, not really, but there are some pop-ups), notes that the garage is:

“Size: 6,300 sq. ft. This cavelike structure is the largest and best hidden of three garages. Built entirely underground of concrete and stainless steel, it can easily park 10 or more cars. Some of the concrete is purposely broken for a “deconstructivist” look”

Ooooh, yuck, bad 80s / 90s deconstructivism. That’ll date you. Just have a look at this fireplace!

Hideous beyond reproach. I suspect we all knew, but I think it is official, and a reminder as to why Windows is just so naff (design direction from the head down… …and don’t even get me started on Steve Ballmer!). I’ve seen enough. Architects on this were Bohlin Cywinski Jackson- here is the link from their website.

So, enough of that crap. What about that other computer system mogul, the notorious design nazi Steve Jobs, king of Apple? Seeing as Apple has now grown to such proportions that it is the most highly valued company since just about the beginning of time, and Jobs has made us all covet iPods, iPhones, and iPads, not to mention a gleaming MacBook Air for Christmas… what would he build? I found this quite interesting – it seems, they are also the architect for his own house. Oh-oh, not sounding good so far, right? But then again, they are the same architects on the super-gorgeous minimalist Apple stores in the US and UK – all by Bohlin Cywinski Jackson as well. Which I think we can all agree are a tour-de-force of minimalism.

So, having seen all that, what do you think of these plans – rumoured by Gizmodo to be Steve Jobs latest house plans:

Too small to really see the details, I know, but basically it is just a simple sleek 3-4 bedroom house, minimalist, calm and quiet and with a logical sense of order and no bloated silly features. All the service spaces in one single simple row, tightly packed into a solid state core, and the rest is glazing. Oh, wait, no, that’s the iPad.

Here’s a young Steve jobs, pictured in a Diana Walker photo from 1982, when Steve was meditating on a minimalist approach:

Yes, surely a minimal house for a notorious minimalist – that must be it? But the house plans, sad to say, are not the real Steve Jobs house. In fact, you could say that they are Fake Steve Jobs house. So we’re still left none the wiser. The new Jobs house is rumoured to be under 500m2 in size, and still under design. Jobs has had a lot of criticism over the last few years for buying a heritage property, the Jackling House, and then applying to tear it down.

“Nearly everyone knows that in August, after almost a decade of delays, the Apple CEO was finally granted a demolition permit to tear down the now-dilapidated 1920s Woodside, Calif. estate of copper magnate Daniel C. Jackling, where he plans to build his own house. On Tuesday, Gizmodo released what it said were exclusive blueprints of the mansion.

There’s just one problem: The plans that the site chose to show (see below) were scanned from Woodside’s June 2009 Town Council Agenda, and were for the sole use of estimating the environmental costs of various demolition alternatives for the Jackling House. Designed by famed California architect George Washington Smith, the 17,250-square-foot, 14-bedroom Jackling House was once a pristine gem of Spanish Colonial Revival architecture. Jobs bought the six-acre property in 1983 at the tender age of 29, with the explicit intention of tearing it down. “[It’s] one of the biggest abominations of a house I’ve ever seen,” he was quoted as saying in The New York Times in 2004, when he first applied for a demolition permit. The house was ”poorly built. It was never really a very interesting house to start with, so I think I could build something far, far nicer and far more historically interesting down the road.”

Why did the chicken…?