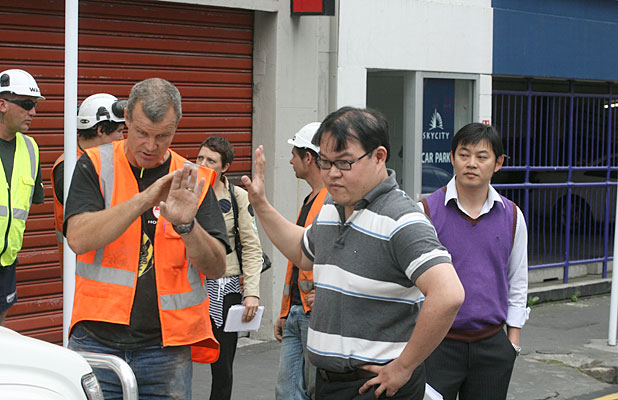 So, Auckland awoke to the news that a “historic building” had been knocked down last night, in possibly the dodgiest piece of developer dealings seen since the 1980s (outside of Christchurch of course). The 124 year old Palace building “had to” be knocked down due to a structural instability it had developed “overnight” as it was being turned into a “brothel”. As usual with the Chow brothers, this decision reeks of lies, deception, and plain old outright breaking the law. You may be able to find dodger developers in New Zealand, but if so, I haven’t met them yet.

The Chows are of course the idiotic duo that chopped down a listed heritage tree in Tory St a couple of years ago, and argued their way out of a $200,000 potential fine and 3 months jail, to a much less severe slap on the wrist of a $2000 fine for destroying one of Wellington’s most beautiful trees.

Let’s hope that the Auckland Council don’t have the wool pulled over their eyes by this duo, and that they have whole rule book thrown at them, complete with fine and jail term this time.

Of course, that’s assuming that the Auckland Council is really regretting this demolition, and isn’t just crying big Brown crocodile tears over this. Auckland has a terrible record of demolishing anything vaguely heritagy, with the classic case being the demo of His Majesty’s Theatre on New Years Eve in the 1980s, when, oh, so sorry, the Council Office was closed at the time. Mayor at the time? Cath Tizard, later to be crowned as Governor General, and implicit in all it’s dodgyness.
Such a thing would never happen here now, would it?

Post-script 10 Dec 2010: Oh no, such dodgyness does exist here after all. As Scoop reports, last night a special thank you party was given for out-going Mayor Kerry Prendergast, featuring her lovely husband Rex Nichols, and many other property developers – including the not so lovely Chow brothers. New Mayor, Celia Wade-Brown, presumably was not invited.

Lindsay Shelton at Scoop notes comments from the Fish, and puts it succinctly that: “On another page of the same issue, the DomPost reports that the two brothel-owning brothers were among 400 invited guests at this weekâ€™s gourmet dinner in honour of Kerry Prendergast. It was held in the St James Theatre, next door to the Chowâ€™s Splash Club which offers girls for $175 (cash) for 30 minutes. If an unknowing citizen wonders why the owners of a brothel would be invited to a dinner honouring a former Wellington mayor (where the Prime Minister was also a guest), the answer may be that Michael and John Chow are not only prominent in the sex industry. They have also become successful as property developers.”