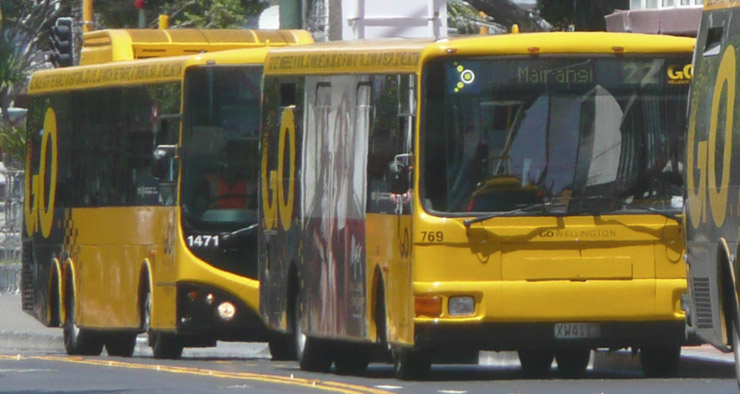 Bus routes – but where?

I’m not sure if you have picked up on this, but this recent article in the Dominion Post (Katie Chapman, 31 July 2015) really shows how inept our Greater Wellington Council are:
“Plans to fully separate bus lanes from central city traffic have been shelved.”

If you recall, a year or two ago Price Waterhouse Coopers were tasked with producing a report on Wellington’s rapid public transport future. The Eye of the Fish discussed it back here where we lamented the loss of electric trolley buses – the most ecological method of transport available in Wellington. PWC are, of course, a company of accountants – bean-counters, who may know the cost of some things, but have no idea of the value, and certainly no idea of anything to do with Public Transport. After a year of deliberation and over a million of ratepayers money, they “whittled down” a dozen or more options into just 3 – either Light Rail, or Bus Rapid Transit, or Stay as we are. (That last one’s not really an option now, is it?).

After another period of deliberation, and some deliberate lying, incompetence, and obfuscation, the Light Rail was shelved and Bus Rapid Transit was declared to be the route forward. Now, the BRT option itself has also been shelved, leaving us with – well, pretty much nothing except stay as we are. Useless, useless, useless.

“A preliminary business case into plans to build a bus rapid transit network from Wellington Railway Station to Newtown and Kilbirnie have been narrowed down to two options for further investigation. The first will see bus lanes at targeted locations along the core route, with buses given limited priority at intersections. It would carry a price tag of $58.8m million.
The second $127.2m option would see buses given full priority at intersections and bus lanes along the whole route. Both those options will now be further developed with complete business cases. However, an option to build bus lanes that were fully segregated from traffic along the entire route with priority over other traffic at intersections – costing $173.5m – did not make the cut.”

So, we have 2 options, neither of which will work very much better than present, and thus neither of which can be called Rapid any more than Isis can be called Respected. Who is this latest report by? Why, none other than PWC again, the original clueless wonders who know nothing of transport. And the 2 options mentioned in the DomPost report? Not made public yet, of course. Keep the public in the dark and feed them on bullshit.