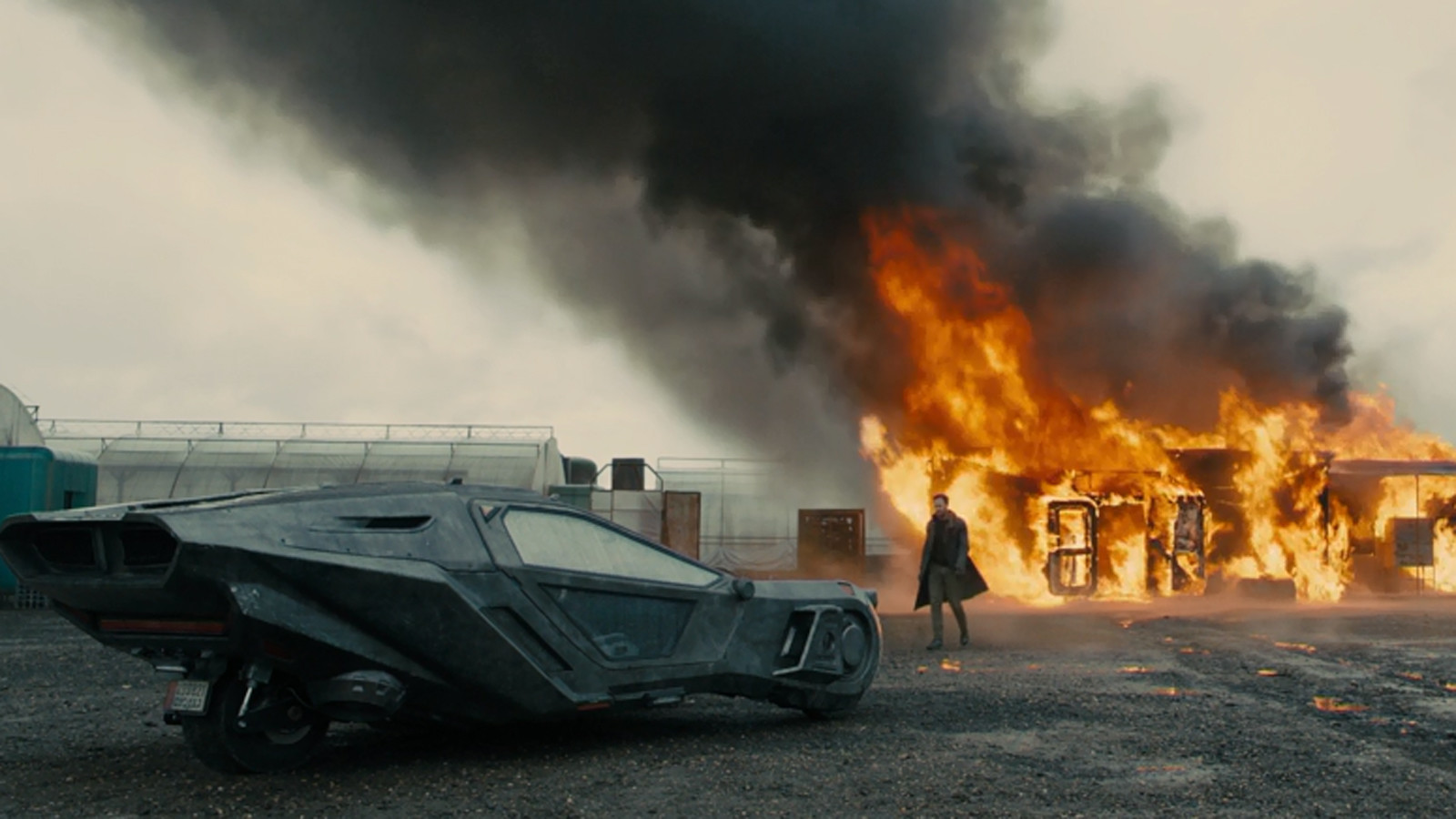 Thirty years is a long time to think about a sequel. Many sequels try to equal the original, most sequels fail, miserably. If Blade Runner was such a gloriously influential cult film, how do you top it with a sequel of any sort? But as you probably know by now, Blade Runner 2049 is not bad at all. Arguably, its fantastic, if we want to have an argument over it. Of course we could just sit there and say â€œMehâ€ and harp on about how much more ground-breaking the original was, but that would be no fun. Remember, the original Blade Runner film was a dismal flop at the box office when it first screened back in 1982, but the vision it portrayed has long lived as an example of what the future may well look like, rather than what we might hope for. I went over this in the last post, where I self-indulgently reviewed the old film, and instead obsessively inspected the furnishings (which were, it must be said, rather nice and with an impeccable heritage).

The depictions of the future in this film are even grimmer than before. Instead of just depicting a possible climate in Los Angeles where it might be raining all the time, in 2049 the evident climate change has got much, much worse. LA’s famous beaches and boardwalks are now gone, supplanted by a monstrously tall sea wall. No one is going surfing with the Beach Boys in this future. In 2049 global warming has evidently caused significant sea level rise – and we know this is already happening – while evil orange-headed dictators in our current, (sur)real life deny that it is even a possibility. In 2049 the climate appears to have turned to snow, or clouds of ash, whether from volcano or forest fires or impending snow storms it is never quite clear – and that is one of the things about this film that makes it so good: there is none of that terrible â€œmansplainingâ€ that Americans are so fond of in their Hollywood trash. I have, in BD 2049 as much as in the original BD, got no idea what is happening half the time, but you know what? It just doesnâ€™t matter, because Iâ€™m lost in the story and because in reality, life doesnâ€™t come with an instruction soundtrack either. Life is what happens when you’re making other plans…

Of course, this film IS still a Hollywood movie however, and so there is the inevitable shoot-em-up, an inevitable car-chase, a couple of inevitable punch-ups which would destroy a normal being (but of course: are replicants normal human beings, or not?), and last but definitely not least, an inevitable search for Whoâ€™s Your Daddy?, with some Howâ€™s Your Father?, or other interminable questioning of where we all came from and why are we all here. At those points in the film I just clasp my head in my hands and shake it wearily, while wiggling my butt in the seat because Iâ€™ve only just become aware that this film is nearly three frigging hours long. I donâ€™t know about you, but I spend very little of my time in real life wondering who my father was – but Americaâ€™s Hollywood studios seem to obsess about this. In French films they donâ€™t care – Betty Blue pokes her eye out with a fork for no reason whatsoever after having lots of glorious sex, but doesnâ€™t question her parentage. In Danish cinema the Girl with the Dragon Tattoo spends ages finding out who took the photo, but again, no concern over the father (just the uncles and the cousins). Guardians of the Galaxy is all about inter-galactic battles, surely? But no, instead, its all about Whoâ€™s Your Daddy. Galaxy 2 is ever worse: really, who cares who your Dad is? And finally, Letâ€™s face it: Star Wars is 7 or 8 films in, and theyâ€™re still trying to find out about the parentage of the lead actors, all over again. Donâ€™t you get sick of that? In New Zild films we worry about the weather, and bits of household furniture and old motorbikes left on beaches, and whether we should kill ourselves from boredom yet, but as far as I can remember, we donâ€™t have a Daddy obsession.

But this obsession with Whoâ€™s Your Daddy is, I guess, excusable, especially if you are a replicant and you just KNOW that someone made you in a factory. Well, I presume it is in a factory somewhere under the rule of the Tyrell Corporation (BD) or the Wallace Corporation (BD 2049) although some of the imagery appears to imply that the replicants just fall, fully formed, fully grown, from vast vats of gloop in the ceiling. So, theyâ€™re not assembled like Arny and his friends in T1 and T2, but somehow the replicant is synthesised fully grown in the shape of Dave Bautista, and never grows old? But then how do we explain the appearance of Harrison Ford, looking very much more than 30 years older in BD 2049, if he was a replicant in the original? And if replicants are made from human flesh, how come they are tougher than we are? I mean, Arnie was tougher because he looked (vaguely) human but had a skeleton of titanium or unobtanium or adamantium etc, but how can Harrison (sorry – Deckard) still be punching it out at the age of 70 with a body made of the same soft squidgy stuff that Iâ€™m built out of? And is Harrison really suffering from dementia already, or is that just good acting? So many questions. So little time to answer them in. So long a film to sit still through. My bum hurts. Time to die.

Well, not literally, obviously that was still a quote. But I nearly did kill myself the other night – with acute depression – instead of going to watch BD 2049 again, I made the near-fatal decision to go and see The Kingsman: Golden Circle – which is the worst film Iâ€™ve seen for several years. Appalling load of crap. Iâ€™m still stunned speechless that someone could even bother to make it, and it reached heights of tastelessness rarely seen before in a beefburger. I mean, if you are going to believe that someone goes into a mincer and gets turned into a beef burger, wouldnâ€™t you take their shoes off first? And their pants? And all the rest? But to mince someone up with their pants still on, and serve them as a patty for human consumption – thatâ€™s just tasteless. But: I digress.

Iâ€™ve just had an interesting, intergalactic conversation with a friend on the other side of the world who has also just come out of watching BD 2049 for the second time, and the conversation centred over whether replicants have a soul, or not. What do you think?

Perhaps we should ask whether even humans have a soul? Is there any proof? Do we in fact weigh 21 grams less when we die due to the weight of a soul leaving our mortal coil? The Catholic Church used to say that all animals had a soul, but that only human souls are immortal. But that’s a cop out. Didnâ€™t another church also say at some time that only men had souls, and not women? Or that humans had souls but a dog did not? I donâ€™t want to get into a theophilosophical debate, but it seems obvious to me that all this wrangling over whether a person has a soul or not comes down to whether we can independently think or not. So by that reckoning, a replicant has as much right to think he or she has a soul, as you or I do. We know that cats and dogs have dreams by watching their legs twitch, and so if dogs have dreams then surely they must have conscious souls as well. Where does it all end? If a machine is made clever enough, do its thought processes dream? This all then comes right back down to the premise of: Do Androids Dream of Electric Sheep? And of course that whole nasty business with Hal in 2001.

Wikipedia says that Blade Runner â€œis a literate science fiction film, thematically enfolding the philosophy of religion and moral implications of human mastery of genetic engineering in the context of classical Greek dramaâ€. That, then, is the philosophical stand point of this film: the morality of whether or not we should dream, of being capable of creation. Women have the power to create life, while men can only create still life, like architecture. Still life? Still born? Still-borne? Still, Life!

But (neatly side-stepping this whole discussion) the soul of the film, for me, is the technology and the architecture. For some (unexplained) reason, there are less cars in this film than in the last. Correction: not cars, but â€œspinnersâ€. Iâ€™m not sure who the maker of the spinners was in the first film, but in this film they are quite clearly labelled Peugeot – which is ironic, as that is surely one auto company that wonâ€™t last the distance of the next 30 years. But, product placement pays, and budgets need stuffing, so Peugeot indeed plays a part in this production. Again, Wikipedia to the rescue:

“a spinner can be driven as a ground-based vehicle, and take off vertically, hover, and cruise using jet propulsion much like VTOL aircraft. They are used extensively by the police to patrol and survey the population, and it is clear that despite restrictions wealthy people can acquire spinner licenses. The vehicle was conceived and designed by Syd Mead who described the spinner as an “aerodyne”â€”a vehicle which directs air downward to create lift, though press kits for the film stated that the spinner was propelled by three engines: â€œconventional internal combustion, jet, and anti-gravity.â€

Well, that’s very nice and all, but we only seem to see the same three spinners. Everyone else walks, or is on a bicycle. See, that’s where arguing over the Island Bay Cycleway gets you.

Thereâ€™s a certain film noir feel to the features, once more – what better way to depict the future than to depict it as already in the past? Las Vegas, when we get there, feels hauntingly derelict by virtue of the orange after-glow of post-nuclear destruction perhaps? There is no sign of the Bradbury Building or the Ennis house in BD 2049, but at least one architect has had their designs immortalised forever in the scenic department.

However for some strange reason the kitchen of Agent Kâ€™s apartment is very similar to that of Deckard, some 30 years before hand. But why? Does K have some relationship to Deckard? Could it be….?

So many questions. Clearly, I have to go and see the film again.