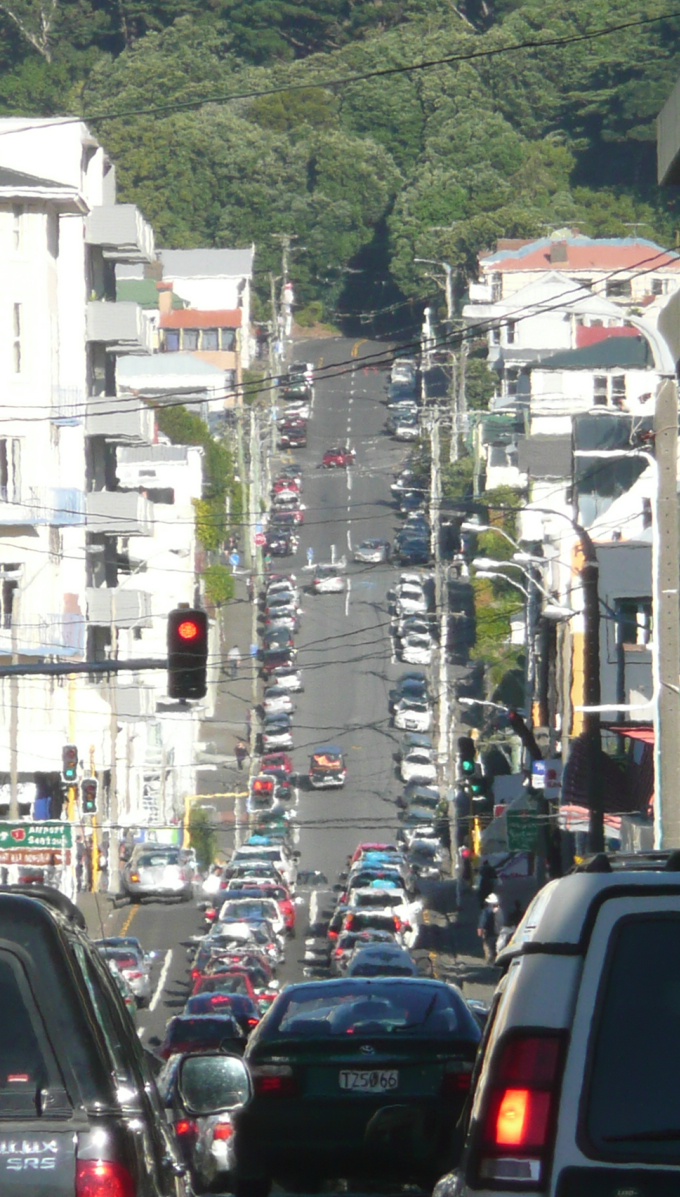 It’s interesting to me – because my vision of traffic improvements is evidently not quite the same as the traffic improvements planned by NZTA. Maybe that’s predictable, or maybe not, but I’ve been wondering what NZTA had in mind for the Inner City Bypass (or ICB, as they like to say). A couple of years ago, when the NZTA were first talking about the Basin Bridge / Concrete Flyover etc, one of the side comments that they muttered under their breath was “and of course we’ll be spending a small amount of money doing some traffic improvements to the existing ICB”. And now they’re doing those small things, and now at last we find out what they are.

Essentially, the “traffic improvements” to the ICB involve adding an extra lane, essentially everywhere. Where it was 3 lanes (at the junction of the Terrace Tunnel at Willis St) it is now 4 lanes. Where it was 2 lanes (along Karo Drive) it is now becoming 3 lanes. Kerb and channel that has only been there since mid 2000s is now being torn up, along with flower beds and any of the other slight attempts at landscaping that Transit made at the time, and extra asphalt is being added. Traffic improvements evidently do not seem to include things like dedicated bus lanes in the new lane of traffic, or a new cycle lane, or even a widened pedestrian pathway, but all it seems to be is just an extra lane of traffic. Ooh, yes, and a monstrous great concrete gun-emplacement of a concrete wall at the junction of Willis St and Abel Smith St. I think there will be a plant there one day – for now, it is only dirt and concrete.

The reason I bring this up, is that there are some new “Traffic Improvements” being planned for Vivian St, as part of the round the Basin works, or the Basin Bridge works, if indeed there is a difference between those. Vivian St is essentially being planned to go from 2 lanes to – yes, you guessed right – to 3 lanes, at the bottom part of it first. So, parking in front of the last block between Tory St and Cambridge Tce will be removed – i think it applies not just at peak time, but perhaps all day long? After all, for Vivian St, as part of the State Highway 1, it never really has a period when it is not busy. Vivian St is, essentially, a controlling factor in the flow of cars into the city. It is only 2 lanes wide at the start, and it is arguable that it only needs to be 2 lanes wide at the finish as well. Certainly if it was 3 lanes all the way through, from top to bottom, then Vivian St would become a defacto motorway extension. Currently, some of the drivers using Vivian St treat it like a motorway anyway – I’ve seen and heard some pretty hairy close misses from people still tuned to the speed they were doing on the motorway, and rather oblivious that they are passing at ground level through one of the most densely packed pedestrian routes in the city, as they zoom across Cuba St. At present, the somewhat ridiculous weaving back and forth (necessitated by small pockets of parking on one side of the road, that then swaps to the other side), is not, as I have thought in the past, merely incompetence by the traffic designers at NZTA, but instead it is actively planned that way, to emphasize the weaving, and thereby slow down the speed of the cars cruising through.

The Basin Bridge Inquiry is proving fascinating though, for all the worms coming out of the skeletons in the closet. SO many closets. So many skeletons. So many worms. The traffic planner acting for the Save the Basin team, John Foster, sounds like a absolute hoot – he’s a crochetty old bugger who is as smart as a tack, and won’t be bullied into signing NZTA simulations. Have you been following all this? There is (unintended?) hilarity in the driest of possible dry ways here, but Foster has been really opening some eyes for me, and I suspect opening a few of the judges as well. First up, here’s a typical snippet of dialog:

MR CAMERON: Okay, so as I understand it Mr Foster in terms of your career which has spanned many years now, you for example have been engaged in advice and work in relation to for example the ICB werenâ€™t you?
MR FOSTER: Yes.
MR CAMERON: And I think were in part responsible for the outcome thatâ€™s been achieved through that particular upgrade to Wellingtonâ€™s road or strategic road.
MR FOSTER: Iâ€™m not sure that Iâ€™m with you, but carry on.
MR CAMERON: Well, you gave advice in relation to the development of the ICB didnâ€™t you?
MR FOSTER: Yes. I did the scheming studies.
MR CAMERON: Yes.
CHAIRPERSON: Sorry, you did the what?
MR FOSTER: The scheming studies. Which then gets approval and a detailed design was done by Opus and then the traffic design group was re-employed during the hearings before the Environment Court.
MR CAMERON: Yes so youâ€™re well familiar with all of the background work that was done in relation to that.
MR FOSTER: Yes.
MR CAMERON: And youâ€™ve of course been involved in the â€“ sorry?
MR FOSTER: The Basin Reserve didnâ€™t figure in that.
MR CAMERON: No, I wasnâ€™t suggesting it did.
MR FOSTER: Okay, sorry. I was having some difficulty.
MR CAMERON: Donâ€™t leap in. Weâ€™ll get there. Okay.
MR FOSTER: I wasnâ€™t in the same paddock, itâ€™s all right.
MR CAMERON: Itâ€™s okay, weâ€™ll get there. And it would be fair to say that over the many years of your career youâ€™ve listened to and no doubt participated in the longstanding conversations that have occurred regarding the Basin Reserve?
MR FOSTER: No, not really. My direct contact with the Basin Reserve as a traffic facility was only recently….

So, there is lots of mis-hearings, and pauses for people to find the right paragraph etc, but there are also some real gems being brought out of the NZTA closet. Take a close look at this, from about day 21 of the proceedings:
MR CAMERON: So your view at the moment is that the conflict that others consider to be of such concern is not an issue for BRT?
MR FOSTER: Of course it is. The problem is not the conflict between the buses and the relatively small and disciplined pulses of traffic going across state highway 1. The conflict is between the buses and the other users. Buses and the others users, the cyclists and the pedestrians and the general traffic, must stay on the Basin Reserve. They must be controlled with two traffic signals at those intersections. And whether or not Option A or Option B is better or not depends on how that is done. The problem you got with buses is that they â€“ and their biggest and worst conflict is with the people who ride in them. Pedestrians.

Related to that is this little gem:
MR BENNION: Thank you Mr Foster. The Boardâ€™s indicating that theyâ€™ve understood that from your evidence and itâ€™s my mistake for going there. Can I just ask you then one last question before I leave you to questions from my friends. And let me ask this carefully in light of whatâ€™s been occurring through the day. Thereâ€™s been some criticism of the BRREO concept and whether it could handle bus rapid transit. In very general terms do you have a comment about the BRREO concept that youâ€™ve examined and its potential to deal with bus rapid transit?
MR FOSTER: Well I can start by saying Iâ€™ve examined the BRREO concept thoroughly in its ability to handle the current bus situation. And my conclusion is it does it just about as well as the proposal tabled by the applicant. I have not examined it in relation to rapid bus transit. Iâ€™m not at all sure whether I know what is meant by that term. I donâ€™t know what the vehicles look like. I donâ€™t know their acceleration and deceleration characteristics. I donâ€™t know how many doors they have and how many people can get out and in in 10 seconds etcetera etcetera.
Iâ€™m not even sure which routes theyâ€™re on so Iâ€™m absolutely incapable of giving you any serious advice about how either proposal will work under those conditions. That would require a considerable amount of work. Moreover it would require models of much more sophistication than those currently available to NZTA.

So those little bits of dialog made me understand how critical the traffic planning is balanced. Foster carefully explained that there were two key “plugs” to stop the city filling up with traffic. On one side, the Terrace Tunnel stops too much traffic coming INTO the city from the north and west. As he said, we don’t know what the traffic will do if we duplicate the capacity for letting more traffic into the city. Instant clogging up of the arteries, I would have thought, and, as Sutch said, a Sick City entails – it is one of the key reasons why Auckland is not getting any better, despite all the new roads they are building. Build more roads, get more cars, clog more city. The other plug is of course the area around the Basin Reserve – the Mt Vic tunnel, the Basin itself, the Taranaki St intersection – all of those create a plug that slows the rate of traffic exiting out of the city. Of course, as Foster says, NZTA’s modelling does not work at a fine enough level of detail to know what is really going to happen when we open the floodgates in and out of the city. It’s increasingly clear that NZTA have not done the modeling with regard to the BRT proposal (and nor should they have, as it has only been announced in the last week or so), but that things as important as loading times depend on things as mundane as ticketing systems.

Arguably, all this work to the SH1 at Vivian St should not happen at all, and if it does, it should only happen underground. A trench. I think we need to start exploring the concept for a trench at least in parts along Vivian St, as 3 lanes at ground level there is just going to be horrific. Got any good suggestions of tunnel integration with the street that I can post up here? Feel free to comment, and we’ll see what we can cobble together.