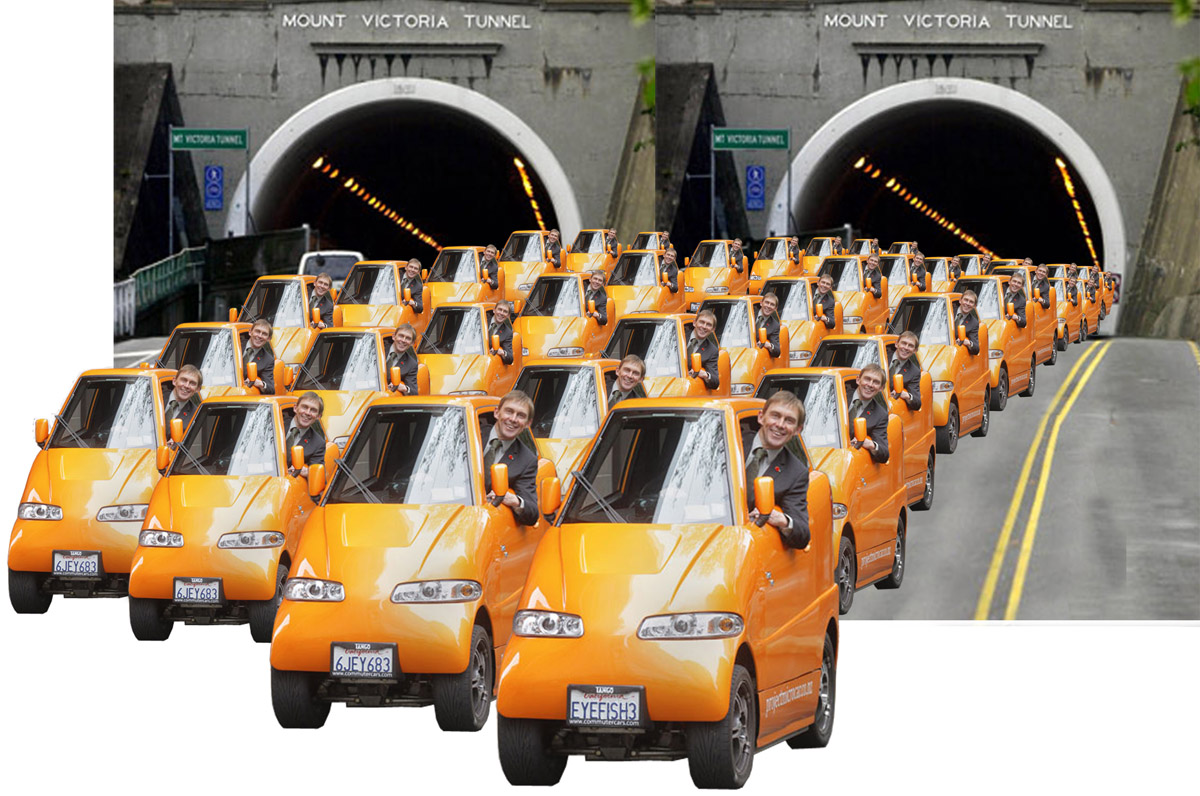 The smallest car I’ve ever seen, since my Matchbox days at least, lead to this little micro-mini number appearing in Wellington the other day. You can read all about it here.

Question is, is the Tango just too small to – well, tango? It’s a two seater, i think, with one passenger behind the other, so its pretty much just an electric motorbike with a plastic box over the top. Councillor Foster, ever keen to be part of the Transport debate, managed to squeeze himself in, and even though he’s undoubtedly perfectly proportioned himself, it seems that even then his head couldn’t fit inside the car.
“Owner Toa Greening believes if 4000 commuters swapped their car for the Tango model, the city’s motorway gridlock and parking woes would be a thing of the past. The vehicles could travel two per lane in a staggered formation, similar to motorbikes. Greening and the automatic car’s American inventor, Rick Woodbury, are looking to set up the world’s first Tango manufacturing plant, and believe Wellington could be ideal.”
So would this really solve the transport crisis? Would having smaller cars solve the problem of having too many cars? Yes, they could drive two abreast, but that only works if absolutely everyone in the city has one of these, and nothing else. If one person has a truck, or an SUV, then we’re back to square one. There’s another big issue here though. As one of only a dozen of these Tango’s world-wide, the cost per car is astronomical – over $200k each. But mass production would, apparently, bring this down to a mere $29,000 – which actually is still really expensive. For something that is a lot less cool, only slightly more safer, and not a whole lot bigger than a motorcycle, then the cost price needs to be a lot closer to that of a Honda 50 than a Harley Davidson.

But with a motorbike you can lean into a corner, quickly overtake, power out of danger, and otherwise wend and weave your way down the road. Motorbikes have a sense of freedom, and escape from claustrophobia that the Tango just doesn’t seem to portray, at least not in any planet I know of. Not only does it have the scary prospect of having to share the road with large trucks, it looks as though it has already had an uncomfortable run in with a couple of them. Sadly, despite her alleged green credentials, I somehow don’t think that the Mayor is going to be volunteering us for several thousand of them.
In the mean time, while we all kick back in this balmy Easter weather…. and do some sunbathing under the flyover… why don’t we just enjoy the possibly improbable sight of the small car taking over the city – thanks to Councilor Foster – Wellington does the Tango!