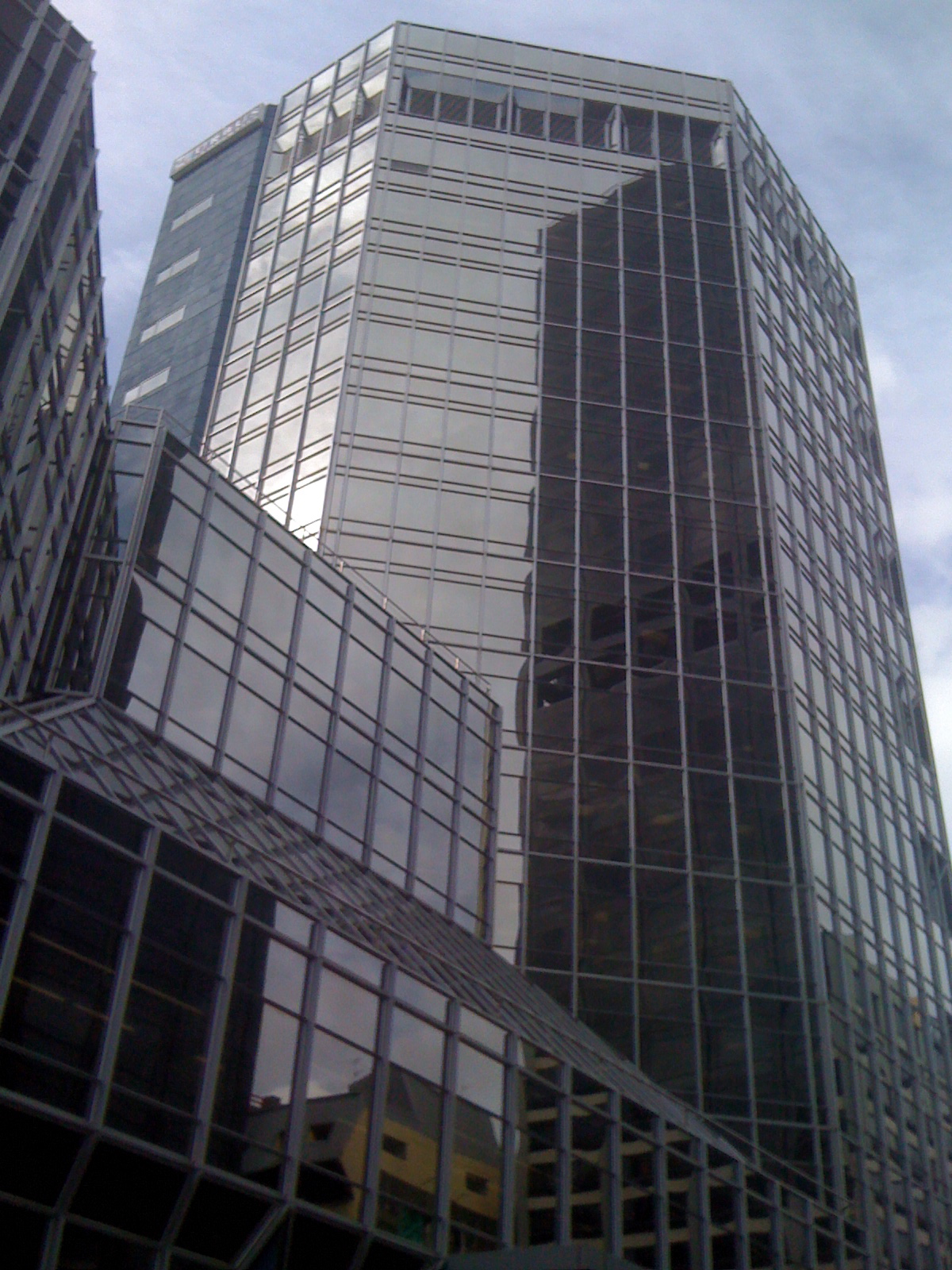 There was a mention a month or two ago of the origin of the CML building, when regular reader Robyn mentioned that it was one of her favourite buildings.
“I like the grid of the outside, the mirror glass, and the variations with the stepped bits. (Argh, I so don’t have the vocab to describe it properly!)”
I was surprised – its never been one of mine, but since then I’ve been having another look. And no worry about the vocab – I don’t know really if there is any correct words to describe its aesthetic. Suggestions welcome.

Stuart Gardyne noted the following:
“Ross Brown of Structon Group was the design architect for CML. There were two stages to that project. The first being the tower (a fabulous building) on the corner of Victoria and Willeston, and the second the lower building on the corner of Willis and Willeston. The ground floor level changes etc. are the result of the expectation, and Ross’s intention, that the original 30’s building would remain. He, like most of us, was very disappointed when Colonial Mutual decided to demolish it. I’ll send an image.”
And indeed he did – thanks Stuart – it used to look like this pic from the Alexander Turnbull Library:

“Built for an estimated 85,000 pounds, also to the designs of Hennessy and Hennessey. Like the Prudential, beautifully rendered watercolours were prepared by the architects. It is the same design as had been or was to be built by CML in Adelaide, Durban, Port Elizabeth (Sth Africa) and Melbourne. It was essentially a modernised treatment of the Romanesque style, and displayed a considerable amount of colour. The building was distinguished by the gargoyles and heads which decorated the facade.” Constructed 1933.
And they’re not joking there. I’ve unearthed these pictures following, on the Skyscraper Cities website, where I think they are showing the CML building apparently still standing in Perth, Western Australia. Obviously this one was by the same crew at Hennessy and Hennessy as well: it looks, on a cursory glance, to have been almost identical.

The details in particular are very informative as to what we may have seen on our own (now demolished) CML building:

I don’t know – I think I would have got a little bit bored doing identical buildings on different cities / countries around the world – and it is kind of sad that we don’t still have this one on the books in Wellington. What we do have, of course, is the new CML building, which is also a little castellated around the edges – in fact, there is an inverse rebated zigzag thing going on climbing up the external wall.

The tower is quite well finished, in strong contrast to the second, lower part, which seems to have never really recovered from the demolition of its better half. There is a large chunk of the old building on display in the downstairs lobby – looking sort of weirdly adrift – washed up, perhaps, from a ship-wrecked CML tower, and very much out of place.
It’s the ground floor of this building that has never really felt comfortable – the entry to the tower is stuck alone on the south facing side street, the Levi shop on the corner has covered all its display windows with giant posters so that it never really feels more than just a doorway, and of course it is always stuck on ‘the wrong side of the street’.