Venice has been in the news lately, with the highest floods recorded for 20 years. 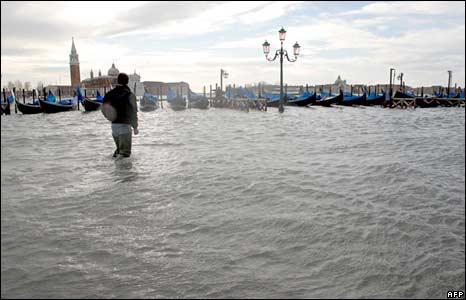 La Serenissima has always had a penchant for the wet and the melodramatic, but their recent experience is leaving them more than wet around the edges. While floods and Spring tides have always occurred, wetting the feet of the wealthy and raising the level in the tidal lagoon well above the comfortable; when it starts to get knee high and thigh high then even the most serene of Venetians must be getting their doublet and hose, if not their knickers, in a twist. 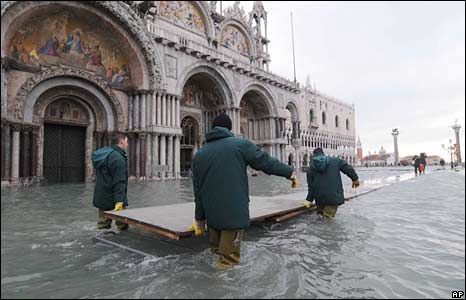 But how would we cope here in Wellington if a similar flood occurred?

Our city sits in a relatively well-restrained harbour, the great Eye of the Fish of Maui, with most of our central city streets sitting at about 2 to 2.5m above Mean Sea Level. Our tide in Wellington is typically just a little over 1m, meaning that at every high tide, every day, the sea level is perhaps only a metre or two below our feet. Open those manholes to the stormwater, and you may smell the salt, as some still drain to the sea. Luckily, we’ve separated out the sewerage lines to run to a giant holding tank under the Michael Fowler Centre’s carpark, so that if we get a storm surge, we can poo on assured that our harbour won’t get ‘soiled’.

That’s the way it used to be in Venice too: a metre above the waterline, except that they built on small islands in a muddy estuary, and then used timber piles to pile their brick and stone creations on. Over the years the timber has been decaying, and the city’s artesian wells have helped lower the city closer to the water – never mind global warming, Venice is in serious trouble regardless. 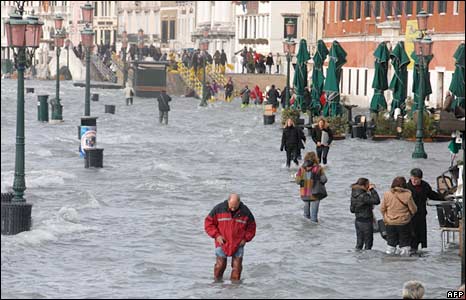 Venice has a similar tidal range to Wellington – slightly smaller. When they get tides over 1.1m, they start to get a bit damp around the edges, and so to change this, a project called MOSE has been introduced, and is due to be complete by 2011. Modulo Sperimentale Elettromeccanico is a project to install 79 inflatable metal barriers at the many entry points to the lagoon, which will be inflated to block water on exceptionally high tides. Venice’s highest tide ever was 1.94m in 1966: the tides this week must have been getting close to that record.

We get high tides here in Wellington too, but we’re built on rock (west of Lambton Quay) and reclaimed soil (but luckily, not timber piles). We’re unlikely to ever try to block off the entrance to the harbour with a giant inflatable bag – aside from the cost, size and the silliness factor, there’s bound to be a sharp rock or a taniwha that would puncture the balloon – and besides, water can just gurgle in over Kilburnie and Rongotai, which are so close to the high water mark that a mere couple of hundred years ago they were probably just tidal feeding grounds for Godwits. If a tsunami hits Wellington, as depicted in that tv doco a short while ago, K & R will be the first areas to succumb to the sea. 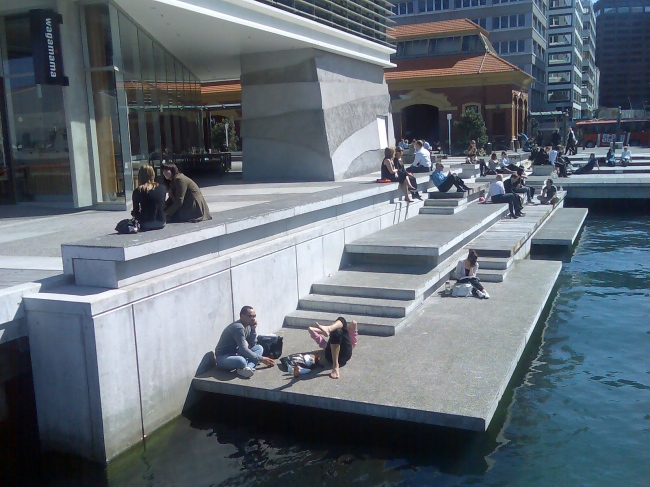 The most exciting place to see the big tides that we do sometimes get, is of course down on the waterfront, either in Athfield’s cutout wharf slot at Taranaki, or in the new Kumutoto stream mouth further north (where at a spring tide the water laps over the lowest platform). Rumour has it that the giant culvert exiting into the harbour here actually carries the remains of the Kumutoto Stream, which runs down from Woodward St. If you’re game enough, at high tide it is full to the top: you could swim all the way to Lambton Quay. 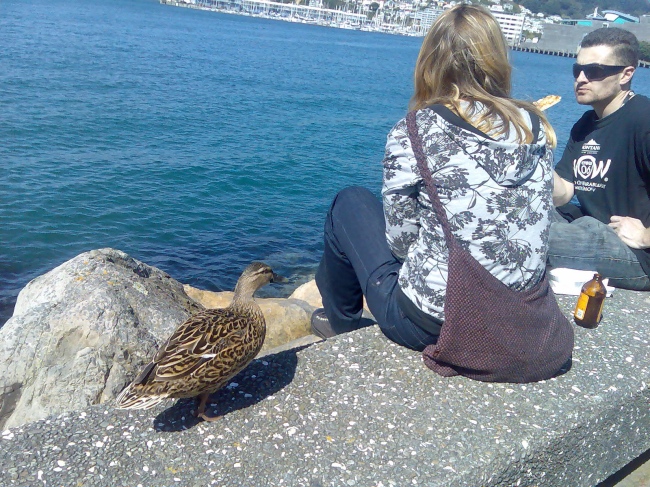 Throw in a little bit of cimate change sea level rise, and viola, we can have some gondolas on our streets too :)

So you reckon hoe out Cambridge/Kent and the Basin, keep going all the way up Adelaide, then a canal tunnel through to the airport?

While the hole inflatable barrier thing is a bit silly, I am sure the dutch can whip you up a nice concrete one complete with a set of locks to allow ferries in and out.

They could even build you a nice cycle path from moa point to lyall bay just to keep the good burghers of Kilbirne dry.

>you could swim all the way to Lambton Quay.

And then what?… can you pop out on to the street using a man/person hole, or do you have to swim back to the harbour?

And where does the water come from to start the stream at Lambton Quay?… drains?

DavidP: I assume the water includes the eventual outlet of what bubbles its way through the botanical gardens, and disappears into a great big pipe at next to glenmore street.

Indeed, the prospect of popping out at Woodward St in your speedos may be a bit frightening, with all those lunchtime shoppers, but that is the original outlet point of the Kumutoto stream. As greenwelly says, the stream itself has been bubbling down through the Thorndon / Kelburn area through people’s back yards and the botanical garden, trickling down near the Terrace to the lowest point (the Wellington Club building) into Woodward St and the eventual output point is the harbour.

At the time of the Treaty signing in Wellington, there were a couple of well established pa in the area, with one at Pipitea and one at Kumutoto (now the area around Woodward St), where they used to fish for kai moana and grow flax for export to Australia.

“The site was known as a flax collecting area and a boat landing site, and in 1831 served as the central flax-collection point in a network of flax stations up and down the east of the North Island. Flax, because of its strength, was a sought after commodity by settlers during this period, as it was used as an everyday item, for example as strapping and ropes for shipping, and for the latching and thatching of houses and roofing.”

“This site was the earlier dwelling place of Te Atiawa chief Wi Tako Ngatata, who along with approximately fifty other people moved to Kumutoto when Ngati Mutunga left for the Chathams in 1835.”

“Kumutoto ceased to exist as an occupied settlement in 1853 when Wi Tako moved to the Hutt Valley.”

Greenwelly took the words out of my mouth – I’ve been thinking for a while now that global warming may require we block off the harbour – and perhaps build dikes to deal with the Kilbirnie and Rongotai issue.

Does anyone know how much higher most of petone is above sea level etc? Some global warming projections I’ve seen indicate a sea level rise of 4, 6, or more meters. It might be expensive, it might sound silly, but it might be the only way to save the city.

With luck (fat chance) it’ll stay below 1 metre, and we’ll be dealing with just frequent flooding instead. Building a dam across the harbour entrance would seriously screw the health of the harbour. No more whale or dolphin visitations either. :(

But does make you wonder what if any planning the Council is making for it. Certainly never heard anything from local/central govt in NZ regarding it. The IPCC report I believe only refers to something like 59cms as the worst case. So maybe they have a false sense of security. Given most climate models say it may likely be much more extreme.