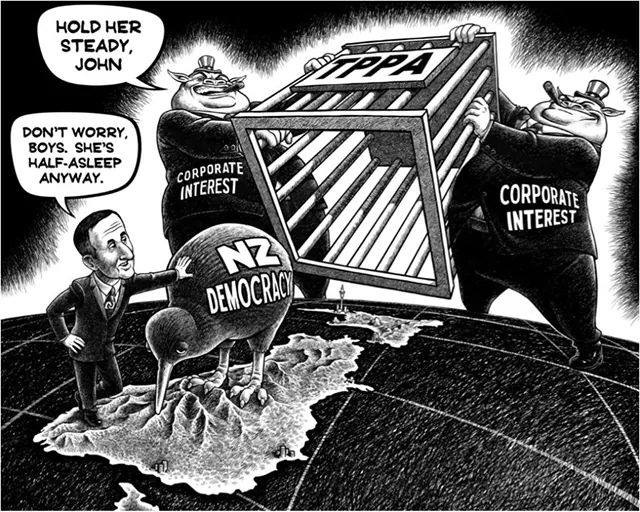 It was a cold, wet day in September, and the clocks were striking thirteen. A freezing, damp front spread through the country, blanketing the land with wave after wave of wind-chilled moisture, soaking into the ground where soil remained uncovered by asphalt. It soaked too into the clothing of those that ventured out, wool-blends steaming gently when they reached the comfort of indoors again. The rain is always welcome in the country, plumping the soil, lubricating the fatness of the worms, and providing the goodness so that the sheep and cattle can eat, endlessly, fattening their bodies for slaughter. Farmers feed out cautiously, little need for extra sustenance in these conditions, checking that their flocks are active and not feeling the cold. For some reason, farmers always vote for the boys in blue, in every sense. They vote for law and order and for full fat milk prices. They vote for Fonterra and vote for Key. They vote for themselves and for the continuation of the New Zealand lifestyle, for control of the land, for a new Holden ute outside the farm gate at Christmas.

It’s different in the cities, or at least it used to be. While the countryside lay blue, resplendently cloaked in a mantle of wool-clip payouts and now milk-fat receipts, the cities always had a strong coating of red. Red for the unions, for the workers in the factories, for those that live as part of the industrial machine. Red for the cities where there was a university within the city walls, both in terms of the vibrant, violent student body politic, raging against the system; red too in terms of their teachers, who had read too much and knew the truth behind the figures: that wealth does not trickle down. Red was the colour of the workers, the colour of the young, the dispossessed, the people who felt that it wasn’t right. Red was the lifeblood of the people, sometimes spilling out onto the land in hard fought battles against the state’s authority. But not any more.

The colors have changed now. New Zealand, Aotearoa, the land of my ancestors, the home of my people: New Zealand has changed now. Once a country where smarminess was disliked, where underhanded ness and backhanded ness were unknown terms, where blue was blue and red was red, this country is multi-coloured now. A strong tinge of green permeates the core of our nation. It’s not the dark, sullen green of the native bush, that dusky grey green of the undergrowth that our flightless birds mimic, nor the verdant green of lush grassy meadows filling cows with milk. Instead it’s a rich green, not greeny-blue nor tinged with red, but green for Green’s sake, concentrated pure green that focuses on the need for the land to heal after years of neglect. Other colors run through here too: a tiny streak of purple, like a bouffant hairdo, flecks a painting in northern suburbs. A black and silver flag flies high, gold card glittering in the very definitely fading sunshine. It’s the last stand for the deeply chiseled lines that carve the moko in the face of its founder, eyes winking with mischievous delight. The persistent light blue colour that shows its face, unfurls a flag and flaps wildly, then folds, gently, back into oblivion again till the next time. And a tiny flash of black and red, that flashed so brightly and so quickly, like the russet underside the wings of a kaka as it flies towards the feeding station in Zealandia, but this time the red and black has been snuffed out. One minute it is there, the next it is gone, all light extinguished as if it has been sat on by a pair of overly large buttocks, clad in lederhosen perhaps.

The new waves of immigrants have changed the mix once again. Aotearoa is made from immigrants, there is no native species here apart from the birds and the trees. Indeed: our birds are unique, found nowhere else on earth, and fragile for that. They called us Birdland once, the sound of species avian so plentiful that it kept Cook and his men awake, as they anchored a quarter mile offshore to escape the deafening sound of the dawn chorus from our feathered friends. No longer: the forests are silent now. We’ve cut down the forests so that humans can thrive: the timber long wasted away. Mighty kauri and totara forests, exported abroad, reduced to planks, reduced to smoke. The tall and noble kahikatea reduced to butter boxes, sent to England in thin planks 18 inches long, packed with congealed fatty breast milk byproducts from the udders of our faithful four legged captives. The rimu forests, once plentiful, now sliced and diced and spliced into the homes that spread across the countryside, slowly rotting away as studs and dwangs corrode over time. But our mammal species are just clones from elsewhere, some doing better here than others. Cats, dogs, sheep, horses, cattle: all seem to thrive here. Humans too, to a limited extent. Rats and mice, weasels and stoats, rabbits and other furry vermin, they all seem to relish this jungle-clad land we share. No natural food chain to keep them in check: it’s a wonder that foxes and wolves weren’t introduced as well, to keep the other species in check. Perhaps they were: perhaps a lone wolf really does still tread the shores, a black panther in Geraldine, or a jackall perhaps, snapping at the feet of the retreating immigrants.

I’m not sure what our most recent immigrants make of New Zealand, this strangely hypnotic land of ours. So quiet and sleepy this morning, no noise from outside. No cheering in the streets, just business as usual. Nothing changes. Everything stays the same. Our northernmost city is immigrant-central, awash with a tide of people who speak a wave of languages from countries far away. Last week I was in Auckland, and I took a bus: there was not a Pakeha face nor a Maori face to be seen. All the occupants were immigrants: from China, from India, from the Philippines, from the Islands, from the Middle East. I felt, truly, like a Fish out of water. We don’t notice that so much in Wellington, where our populations are perhaps more mixed, where taking a bus is not the sign of a recent arrival who can’t afford a car, but instead it is the sign of the established, who probably owns a car but knows that it is better for everyone if they don’t use it for commuting. But the immigrants in Auckland are intent on not using buses for long. They know that if they work hard, they will soon be able to buy a car, to buy a house, to buy a plot of land, and to drive to work. To vote for that nice John Key. The New Zealand dream: a house in the suburbs. A white picket fence. Green grass front lawn. A half-gallon, quarter-acre, pavlova paradise dream. Except that that particular dream died many years ago. But shush, don’t tell anyone.