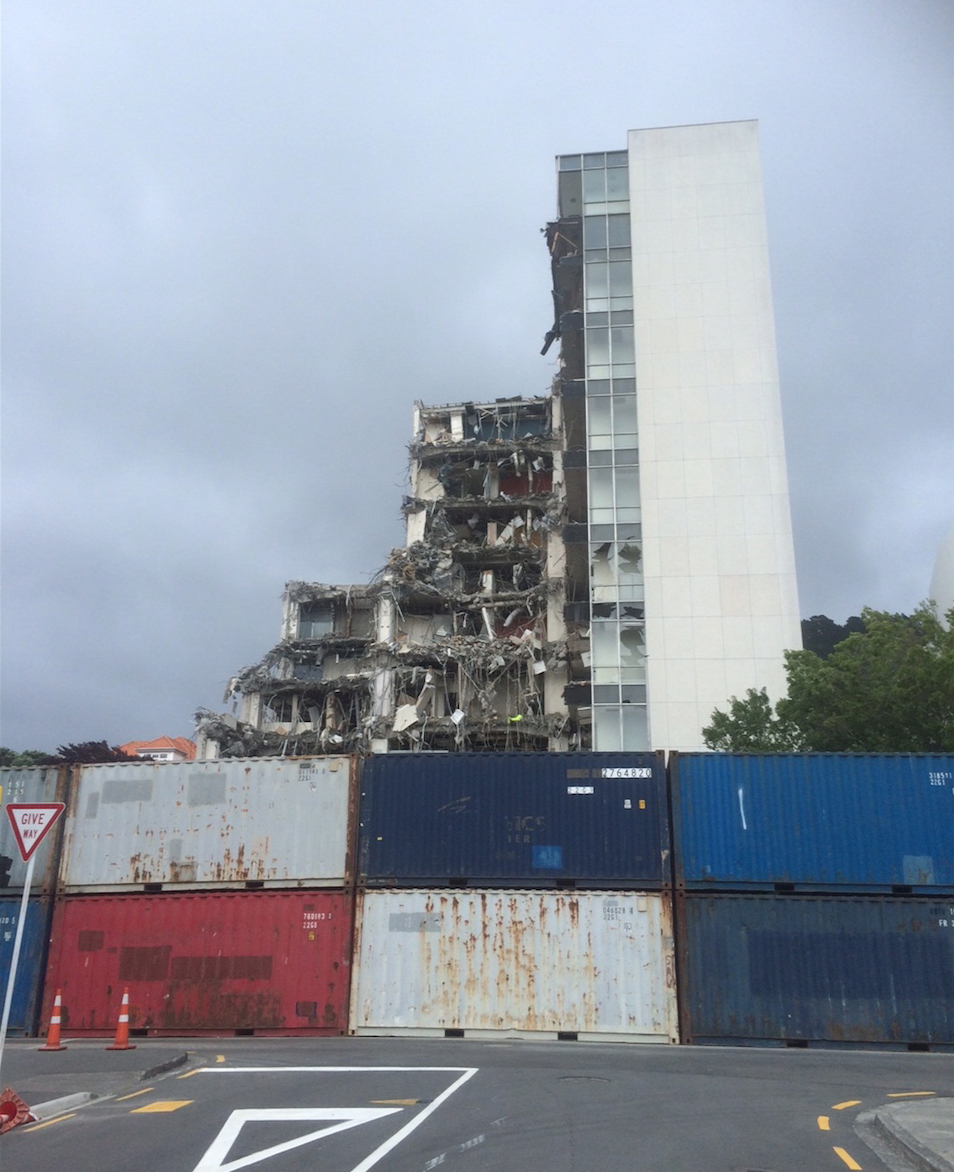 The birth and death of ICI: 61 Molesworth

It’s not just Bunny Walters and ZsaZsa Gabor that have gone to meet their maker in the last few days – it is the building at 61 Molesworth St that is quickly shuffling off this mortal coil. They say that modern buildings have a 50 year life span – Zsa Zsa got to 99, Bunny got to 63 – but ICI only just passed 50. Almost reaching its 54th birthday, ICI House was issued with a building consent on 24 Jan 1964, to Fletcher Construction. And, ordered to be demolished after the discovery of a “vertical beam” that had “shorn off” according to an excited and rather confused Fire Chief after the November 14 quake.

We all, in the construction business, heaved a sigh of exasperation and said in a loud stage whisper “its not a beam, you idiot, its a frikken COLUMN” and it sounds like it had exhibited shear-axial failure* – the concrete fractured away and the steel reinforcing was left unsupported. We (the public) have not been privy yet to the knowledge as to what particular column had cracked up under pressure, although I am presuming that it may have been somewhere near the link to the stair/lift core? Does that giant muncher machine have a camera up near its teeth I wonder? It is almost certainly not a column in the actual stair core itself, as that is now the only piece of the puzzle still standing. Very bloody strong too.

Someone at the WCC Archives has very thoughtfully sought out and sent through to the Eye of the Fish a few of the construction photos of the building under construction in 1964 (thank you – very kind!) and so I include them here, along with a couple of snaps i took over a week ago – and some more I took just yesterday. It was Sunday, so no work on site, but it was also very windy, so loose building materials were sort of flapping around and occasionally breaking loose and flying down to earth. The construction process was certainly more orderly than the deconstruction process!

Concrete, steel, aluminium and glass, along with a smattering of fibreglass batts and the odd bit of timber – these are the things that our modern buildings are made of, and what our town dump is evidently going to be full of. It doesn’t appear as though anything is going to be recycled or is recyclable – it is all just a big ugly tangled mess, shoved into the back of a large truck and carted off to the landfill. Mixed in with that is the remains of a resident flat or two, courtesy of the goodness of the heart of the Prime Property group, who had leased a few areas of the building for people to live in. Quite a humanitarian response I would have thought, although the city council are tut-tutting away about how wicked this was. Still: off to the dump it goes. So much for a green city, well known for its attitudes to recycling.

If you want to learn more about column collapse, then I recommend having a read of this paper: “Seismic shear-axial failure of reinforced concrete columns vs. system level structural collapse” (2013) by Justin A. Murray and Mehrdad Sasani at the Department of Civil and Environmental Engineering, Northeastern University, Boston, MA, United States. Published by Elsevier here. It explains it all so much better than I can – and to help explain it even further, I hope that Murray and Sasani don’t mind if I show a pic from their paper, purely as a public information exercise. Here are two of their examples: A) column shear failure, and B) longitudinal bar buckling.

Basically, my take on it is that if you see either of these in a building that you are in, the building is fucked* and if you don’t get out soon, so will you be. Run, don’t walk! It is that characteristic X shape across the column that gives it away – the building has been racked by large seismic oscillations, and the concrete has lost its strength, in turn leading to the reinforcing steel buckling too. Basically: not a good sign! They put it a lot more poetically:

“Column shear-axial failure in existing vulnerable reinforced concrete (RC) frame buildings constructed before the mid 1970s is a major seismic risk. Evaluating near-collapse performance of structures requires reliable prediction of their collapse resistance. Progressive collapse is defined as the propagation of an initial failure to other elements, eventually causing collapse of an entire structure or a disproportionally large part of it.” p382.

When I was up there on Sunday taking photos, a wandering couple from the cruise ship parked nearby asked me “Why don’t they just blow it up?” – as we all know, on TV people blow buildings up all the time, and 9/11 “truthers” (aka idiots) believe that people can just sneak into buildings, attach some explosives and knock things down in the twinkling of an eye. My (uninformed, but common sense) guess was that because the building was next to the Cathedral, the main motorway, the Wellington fault line, and some residential dwellings and schools, an explosion might not be such a good idea. Coupled with the fact that no-one particularly wants to go into a building that may collapse at any second…. The tourists bought my argument, and went away, a lot happier. But an excerpt from Murray and Sasani’s paper had me intrigued:

“Removing two out of the three columns on one side of the building by implosion results in only 6.35 mm (0.25 in.) of vertical displacement [9]. In this building, it is shown that Vierendeel frame action, which is characterized by double curvature deformations of beams and columns, redistributed gravity loads away from the damaged region. These experiments have shown structuresâ€™ ability to redistribute the gravity loads after a column failure (explosion), even when examining non-ductile pre-1970s building construction.” p385.

Indeed, Murray and Sasani note that:
“The Van Nuys Holiday Inn Building is an RC building in Van Nuys, California. It has experienced several significant earth- quakes since it was built, and was damaged extensively because of them. Shear-axial failures occurred in several locations within the structure, yet the structure did not collapse. Several studies have been conducted on the behavior of this building, as it was instrumented with sensors throughout its lifespan, easing the process of analysis. The main damage and acceleration data for the building was compiled during the 1994 Northridge Earthquake” (p383) and also:

“The most important observation in the case of the Van Nuys Holiday Inn Building is that the structure did not collapse. Although there were structural failures in various locations throughout the building, the structure was able to redistribute the lateral and gravity loads to the elements that are away from the damaged area. This is a system-level response, due to surrounding columns, floor slab, spandrel beams, as well as the interaction between them” (p383).

So: in California, also home to the same Pacific ring of fire that we inhabit, their earthquake damaged buildings remain: they repair their buildings rather than knock them down. There is no doubt that this building (ICI House) was damaged, but we have only heard of one column that broke or “shorn off”. Is that not repairable? Certainly, on the Readings carpark, apparently they have discovered that 11 out of 15? columns have suffered significant structural damage, so definitely : off with its head. And body. And feet. But in the case of ICI House, so evidently still standing strong despite the “monster crushing machine” attacking it for 3 weeks now, was this really the right response?

As deserves a lady of Zsa-Zsa’s stature, and in keeping with the building theme in this post, I’ll leave the last word to her: