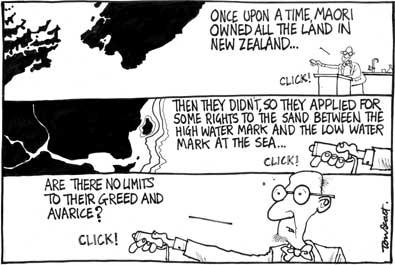 I find it hard to believe that this issue continues to wash around our political landscape, with so little positive effort to resolve it. The Foreshore and Seabed issue has been going on for – what – five years now? and is still a stinker. And yet, on the surface of it, this issue is a simple one to resolve. The Fish is presumptuous enough (as always) to seek to resolve this, and move on. Enough, already!

I’ve been following this issue unravel and unravel for a number of years, continually amazed at the inability of the politicos to get it wrong, to screw it up, to propose manifestly stupid and unfair ideas over this most basic part of the NZ constitutional right to exist. Putting aside issues of race (for a moment, bear with me), the issue of Access is the one that we all thought we had, until we found out that we don’t. Brought up on the firm ground (so we thought – now we hear it is a myth) of the notion of the Queen’s Chain (Victoria, natch, not Liz), the principle founded in NZ is that all people in this country should have the right to walk around the edge of our land. Its not really a difficult concept to understand – one that we have got, nearly everywhere, being the right to dig your toes in the sand where the beach meets the sea. Apparently, as the Queens Chain was not set in law early enough, we do not have an even boundary of 22 yards beset all around our green and pleasant isles – only about 2/3 of it. Even where we don’t have the QC to walk on, we at least have the principle in strong understanding – in NZ, we are allowed to walk along the beach.

The resolution to this is simple: establish Principle One: All should have Access.

The second issue is even simpler: it makes no difference to those who walk on it, as to who Owns it. I couldn’t give two hoots whether the beach I walk on, or swim in, is owned by the Crown, by the Public, by someone Private, by Maori, by Pakeha, by Tongans, Chinese or by Aliens from Alpha Centauri – or, as was promoted this week, by the legal entity of the Treaty of Waitangi itself. Really – honestly – it makes no difference to me, or to you, or to anyone. If we’re allowed to walk, play, or swim there, then we’re allowed to and we will. It is only if we are not allowed to, that we want to know – who said that we can’t? What right have they got to say that? So the true answer to the second issue is – I don’t care: it just doesn’t matter. As long as whoever Owns it understands completely that under no circumstances can they sell off any of the land in question, and that Principle One is always maintained, then we’re all happy.

So, Principle Two is also simple: It doesn’t matter who owns it, Nobody can sell off the Foreshore or Seabed land, and No-one can interfere with Principle One.

So: Principle Three is: Be Fair. Do No Evil. Apply law to Maori and Pakeha alike, Corporate and Private alike.

There, that’s it. The law is resolved. I’ll leave the boring details to the boring details persons. There are other issues obviously, like who has the right to use the foreshore or seabed for fishing / fish-farming? Well, that’s what we have Councils for, who have a legal obligation to take into account of the Treaty of Waitangi, and I expect them to give due consideration to those issues, and make fair decisions, as long as they have no effect on the principles 1, 2, or 3 above.

But basically, that’s all sorted out then.

Right: on to the next issue. What’s troubling you?