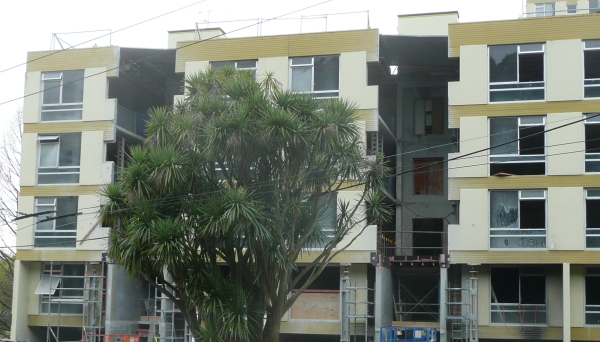 Getting away from all the excitement and kerfuffle of the Christchurch earthquake for a while, and focusing our fish-eyed gaze a little closer to home, the Wellington City Council is proceeding at pace with the modernisation of their social housing stock. We reported just over a year ago on the plans and aspirations for some of those schemes – in this post here – where we looked at the presentation schemes for one CHUP in Te Aro/Mt Cook (Central Park), and another further east in Kilbirnie (Marshall Court). One of our more amusing exchanges with our readers, if I recall. Robyn wanted to know: “Why isn’t newspaper man paying attention to the waving lady? She might be wanting to invite him up to her house for some quinoa salad. He’s too busy reading the news to see what’s really going on in the world, etc.” In the mean time, Council has completed the first of their projects, over in Newtown, with the Te Ara Hou flats – which were pretty nicely designed already, but are now even nicer. They have been upgraded, and re-occupied by Council tenants, who I hope are suitably impressed that their local government loves them enough to spend time and money doing up their homes. Hope they remember to vote !

In the mean time, work has really started on ripped the Central Park scheme apart. Those of you lucky enough to live in Brooklyn will have noticed that massive saw cuts have been made in the Brooklyn side of one of the Central Park buildings – in a pretty dramatic fashion:

Entire large chunks of the building appear to have been cut out and disposed of – actually, probably still on site as rubble – but there is an impressively large amount of slicing up the building going on. Of course, it is always the way – I haven’t got a photo of before, but I certainly do have a photo of after. No, wait – there’s Google Streetview of course. Hold on a tick…. amuse yourself with this one in the mean time:

And yes, here we are. Its amazing what Streetview can do and how quickly it can become part of our lives. Here is a similar view from before, courtesy of Larry and Sergey:

I really am excited by the thought of how we will be able to see history with this Streetview tool. Its been just over 10 years since they started their company, and yet it continues to grow and to dominate not just business, but also our view of time gone by. I think Google have announced, or maybe I imagined it, and they will announce it soon anyway: Google Streetview has the ability to have older versions running concurrently – so you will be able to look back in history to views of your street before it was there as it is now. Not just a regular carload of Google Streetview updating every couple of years, but they’re running an algorithm stitching together old prewar (WWII) photos of Europe, so as to recreate for us a virtually seamless interaction with the past. Doubtful we’ll ever have that for NZ, but hey, we’ve got this tool, which enabled me to just go back in time a little. Anyway: who can tell me what is going on here?

They have, evidently, as we can see, cut in new slots for possible staircases, lift shafts, light wells – something like that – through the side of the old flats and are busy transforming the blocks. Here, courtesy of the friendly people at the Council (thanks Richard MacLean!), is what the scheme will look like when it is finished:

Unfortunately, the rendering cuts off exactly the bit I want to see, which these photos show. Bother. But ain’t that always the way?

I’m picking, and hoping, that earthquake strengthening will have been a big part of this building rework – and probably also a bit of thermal protection as well. Crikey, look at that solid concrete outer wall: I bet it was chilly in there when the Southerly was blowing. Architects are, umm, Novak and Middleton I think – and Structural Engineers are Dunning Thornton. There’s something fantastic and gutsy and very dynamic about that raw concrete edge being supported by those great big props: I think they must be going to install a precast concrete panel in there as a shear wall, or something like that. Or perhaps a lightweight glass box for them to grow their geraniums in. We’ll be watching with intrigue.

And then of course, to finish us off for the day, there is this lovely Old Skool version of civic pride – the funky designer floating balustrade / artwork, and the City coat of arms. Don’t go throwing that away! That’s a piece of design history right there.

Who to Vote for?